In addressing the March 13th seminar 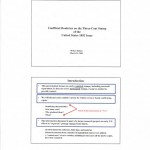 Wilson Hulme focused upon separations made by postal officials, particularly rouletting, prior to the official perforations of February 1856.  This is part of a larger project on separations and much of the information is new.  He resented a 25-page multi-color handout to guide the discussion.  This letter and the leave-behind attachment is an attempt to boil the presentation down to mailable size.  In an overview perspective, the U.S. officially began issuing a general adhesive stamp issue in 1847; these were imperforate and had to be cut apart.  With the new laws changing rates (1851) and mandating prepayment (1855) the demand for stamps began to grow significantly and scissors as a means of separation proved less and less satisfactory.

The public did not wait for the U.S. Post Office to act. There were a number of ‘unofficial’ or ‘private’ attempts to develop

alternative techniques to separate stamps.  Most were local and developed for an individual or business but some were for a local postoffice that found it too time consuming and inconvenient to cut stamps apart with scissors.  Some attempts were commercial designed to hopefully sell equipment to the government.  The best known, philatelically, are the ‘Chicago perforations’ of E.W. Hadley and the Bemrose machine of England, which both rouletted and perforated.  The latter was purchased by Toppan Carpenter and made our first official perforations in February 1856.  Hulme illustrated the Bemrose machine and a reconstructed block showing both rouletting and perforating trials. 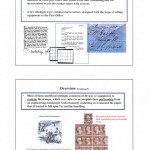 He also showed two of the three first day covers of February 18, 1856, which began the official experimental period that lasted to July 1857.

However two other approaches to machine separation have recently been uncovered, one by John Dobbin in Hartford, Ct. and the other by William Brown in New York.  Here a newspaper notice was shown (Hartford) and a transcript of a letter to the P.O. (New York).  In addition six cities were identified from which two or more copies of rouletted stamps are recorded prior to July 1857; these included Waterbury and New York and added Newbern, N.C., Bergen, NY., Kensington, (Philadelphia, PA.) and Richmond, VA.  A sawtooth separation method was used at Bergen and Richmond.   Additionally, one-of-a-kind rouletted items have been seen from several other cities.  The search to find confirming copies and 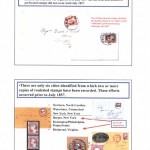