For Lincoln’s birthday, February 12th, the seminar leader was Professor Sample Pitman, who with his charming wife led the presentation on the Emancipation Proclamation and its origin. Dr. Pitman is a Texas boy who came to New York to teach at City College. He has assembled a remarkable holding of artifacts (carvings, chains, whips, tags, etc) similar to some of those shown in the leave-behind, particularly name tag identifications, which he slyly pointed out were the first records of affirmative action as slave holders used them to identify talented slaves who would be rented out to teach unskilled whites their specialty skills. He has also amassed a library that included such rarities as a first edition of Harriet Beecher Stowe’s influential Uncle Tom’s Cabin as well as 400 issues of the Liberator, published beginning January 1, 1831 by abolitionist leader William Lloyd Garrison (1805-1879). Dr. Pitman has spent much of the last decade studying U.S. currency as related to African-Americans and made the interesting point that from the 1880s until 1913, no U.S. currency bill was valid unless it bore the counter-signature of an African-American.

During the decades preceding the Civil War, both the government in Washington and the cadets at West Point were heavily under southern influence as I discussed in regard to the postoffice in Chronicle #192. In the military, Jefferson Davis (1808-1889), a West Pointer and son-in-law to President Taylor, was Secretary of War under Pierce and had seen pro-southern West pointers appointed to key commands. With the outbreak of war, many resigned to fill the Confederate army’s leadership ranks. Immediately after hostilities broke out, Federal troops were sent to protect Washington and riots ensued in pro-southern Baltimore. Benjamin Franklin ‘Beast’ Butler (1818-1893), whose patriotic covers are recorded as Walcott 367-375 was sent to control the city. A Massachusetts lawyer and politician he was a Democrat strongly opposed to Douglas; he advocated nominating Jefferson Davis for the party’s presidential candidate in the 1860 Charleston nominating convention.

During the critical April 1861 days he peacefully arranged the passage of Federal troops through Baltimore, incurring the wrath of Secretary of War Stanton, who punished him by exile to Fortress Monroe in Virginia. There he set the stage for the Emancipation Proclamation by finding a legal loophole that allowed him to declare that the black fugitive slaves who were coming across to Union lines ‘contraband of war’, declining to return them to their owners on the ground that the south had used them as laborers in southern fortifications. Other than his subsequent actions as military governor of New Orleans, where he earned his sobriquet because of his rulings on the anti-occupation actions of Confederate women, this was his major contribution to history. Dr. Pitman showed a number of unused relevant patriotic covers, a number of which do not appear known used in Walcott or Grant’s censuses. These included Walcott #603 ‘Innocent Cause of the War’ (seen on Grant page 1-9) and Walcott 1177 and a variety of Walcott 1061 ‘contraband’ as well as one from the selection of six illustrated in Grant’s chapter 5 ‘contraband caricatures’ (L4961).

Within weeks of Butler’s ruling thousands of blacks had poured into Fortress Monroe according to historian Samuel Eliot Morrison. They were organized into labor battalions and welfare workers appointed to look after them. This also happened at other posts. Future president James Garfield at Shiloh refused to return fugitives despite direct orders from his West Pointer superior risking a court-martial for his actions as he noted in a letter of May 2, 1862. discussing a conspiracy among leading regular army officers to taboo the whole question of slavery. Dr. Pitman noted the embarrassment to the administration and military whose resources were badly stretched by the millions of fugitives and their families coming over like ants or roaches as he graphically put it. 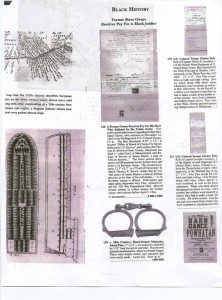 Congress had passed a first ‘Confiscation Act’ in August 1861 confirming Butler’s ‘contraband’ policy and followed with the Confiscation Act of July 12, 1862 expanding the terms. On July 22nd in a Cabinet meeting, Lincoln proposed to free all slaves in rebel territory as of New Years Day 1863. Opposition came from Seward (1801-1872) and Stanton (1814-1869). Steward was the leading political leader of the anti-slavery movement and Lincoln’s political rival, making his ‘irrepressible conflict’ speech in 1858, while Stanton opposed slavery but supported the constitutional rights of slave owners, putting him in direct conflict with Butler. Lincoln saw the time was not yet right and postponed his decision until after the next Union victory which was the Battle of Antietam (9/17/62). One week later, on September 23rd, Lincoln published his Emancipation Proclamation using as basis his powers as Commander in Chief. The flood of fugitives was so great that 300,000 joined the Union armies in one form or another, 180,000 fighting directly in the army and 10,000 in the navy within the year.

To bring the slavery topic directly to New York, Calvet Hahn showed a map of New York in the 1660 period. It showed the area south of Wall Street, a major black monument built in 1653 by 50 New York blacks as a defense against Indian incursions from upper Manhattan and New Jersey. He noted there were eleven blacks by 1626, two years after the first settlement in 1624, and they came from the Congo and Angola as indicated by their names in early census lists: Paul Angola, Simon Congo, Anthony Portuguese, Manuel the Great, and John Francisco. By 1628 blacks represented 5% of the New York population, rising to about 20% in 1664 after the Dutch slaver Gideon landed 300 more. The black population percentage hasn’t changed since. The original black lands in the city were on south William St., just off Broad, opposite Coenties’ Alley and back to Beaver St., e.g. just east of the World Trade Center site! While the black community has been agitated about discovery of a cemetery near present-day City Hall, which was well outside the old wall at Wall St. that protected the city, it is probable that an earlier yet undiscovered black burial ground exists just off the World Trade Center site.

Most African-Americans look to the slave ports of the island of Gorée off Dakar in Senegal or else in the Slave Coast area just north of the Lagos River in Nigeria (Dahomey, Ghana and the port of Abidjan in the Ivory Coast) for their ‘roots’, see the 1730s map attached, for this ‘Bight of Benin’ slaving area, which supplied about half the volume of world’s slave trade. There in the Bight the Hausa slaver state of Zaria in Nigeria sold its merchandise. However, that is not the original source of New York blacks who originated further south from sales by Congo and Angolan slavers selling their countrymen at Banana, Shark’s Point and Cabinda at the mouth of the Congo River beginning in 1580 or upriver at M’Boma to Portuguese or Dutch merchants. .

Mr. Hahn noted that at least one song, ‘The Flying Cloud,’ a pirate ballad refers to the Guinea Coast slave trade. It is a New England song and refers to an unknown colonial era slaving trip. It can be found on Elektra EKL-18 ‘Pirate Songs’ sung by Dick Wilder (1954) and Stinson SLP #8 ‘Haul on the Bowlin’ Vol. 1 sung by A.L. Lloyd and Ewan MacColl.

The lyric narrates how an Irish Waterford man named Arthur Holland signed on as crew on the Trymore ship Ocean Queen to Bermuda and after arriving then onto Captain Moore’s Flying Cloud of Baltimore which went to Africa and picked up 1,800 slaves, loaded them with chains, and put them in 18-inches of living space, but plague swept half away and the bodies were dumped in the ocean and two or three weeks later the remainder were sold in Bermuda to slave in Cuba At this point Moore proposed becoming a pirate, and all but five of the crew accepted including Holland. Pirating worked out well for a long time, for all crews of the captured ships were killed as Moore held that ‘dead men tell no tales.’ Finally in a pitched battle with the British man-of-war Dunmore the main mast of the Cloud was hit by a chain shot and a bombshell set the ship afire while boarders killed Moore and 80 men. At that point the rest surrendered and were taken to Newgate prison to be hung for piracy. The song was well known in Michigan logging camps, but no one has yet identified either Captain Moore or this Flying Cloud. 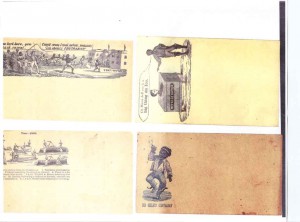