Figure 1 Reproduction of the first page of the Berger-Levrault ‘catalog’ of 9/1861.

Beginning in the 1850s, there was enough interest in stamps that various dealers in antiquities, curios or coins saw an opportunity to make a living from catering to stamp collectors. Among the earliest stamp dealers were: Brussels antiquities dealer J. B. Moens (1852), who had become a collector at 15 and a dealer at 19; William S. Lincoln of London, who became a schoolboy collector/dealer (1853); Stanley Gibbons of Plymouth (1856), who as a 16-year-old schoolboy occupied a portion of his father’s pharmacy shop where he could offer stamps; Berger-Levrault of Strasburg, France (1858), a dealer known for having the world’s first price list or catalog; and George Hussey and James Brennan, who started as the first American dealers.  The Bank of New York employed Hussey from 1836 to 1870.  He introduced a ‘Special Message Post’ in 1854 for carrying notices and employed Brennan as one of his runners. In 1859 both became stamp dealers, Hussey being 47 at the time.  By the early 1860s this handful of pioneer dealers was joined by dozens more.

Effective selling normally requires price lists or catalogs for those who cannot come to one’s store or selling-corner.  The first stamp list was created by Berger-Levrault, dated September 1, 1861.  Other 1861 catalogs or lists quickly followed and multiple editions of a number are known.  Among the catalogs were ones published by numismatist LaPlante, part-time dealer and postal employee Potiquet, and Parisian bookseller Baillieu whose family owned a bindery.  All the 1861 catalogs were-French produced.  On the opposite page is a reproduction of the first page of the very first stamp catalog, the September 1861 Berger-Levault price list reproduced by courtesy of the British Museum.  A number of the other early catalogs are illustrated in my series “The Incunabula of Philatelic Literature on Locals and Carriers’ in the Collectors Club Philatelist issues of May, July and September 1993, pages 183-7, 223-226,295-302 for those who wish to see what they looked like.

In 1862 the Belgian stamp dealer and antiquarian Moens put out a catalog with supplemental illustration, while in England artist-collector Frederick Booty also did so with his Stamp Collector’s Guide.  The same year stamp dealer Mount Brown published a regular catalog using the collection of the Rev. Stainforth as a basis.  One of the earliest stamp collectors, Dr. John E. Gray, a zoologist associated with the British Museum, put out a popular collector-inspire catalog.  Mount Brown’s catalog was pirated and published, with some additional material in America by Philadelphia book, coin and stamp dealer John W. Kline in 1862, using the name A. C. Kline.  An 1862 French catalog also came from Valette, an employee of the French Ministry of the Interior and owner of a German newspaper.  This older collector was the first to put forth a theory of pricing as well as the first to discuss cleaning stamps.  Its author was executed during the Paris Commune of 1871. 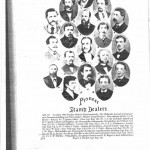 er of the young 1850s collectors became dealers and probably drew into the hobby contemporaries of their own age.  The image on the left shows eighteen of them.  Except for Moens and Kline, none were old enough to be a collector in 1840 and neither Moens or Kline became a stamp collector until the 1850s.  Going down the list number 1 is Jean Baptiste Moens of Brussels (1833-1908), who became a dealer in 1852, fascinated by the stamps on his business mail.  Along with his writer brother-in-law, Louis Hanciau (1845-1924), Moens published one of the great classic philatelic journals, Le Timbre-Poste, beginning in February 1863.  Number 2 is Justin Lallier, (1823-1873), a Parisian dealer, noted French archeologist and creator of one of the most important early albums in 1862  .It was published in French in August 1862 with spaces for 1,200 stamps and later the same year in English as the first English language album. The first American album was published in December 1862 by the Appleton firm. Lallier’s albums, which lasted through some fifteen editions, were barely preceded by a German album printed by bookseller G. Wuttig of Leipzig.  The Wuttig album is still with us today, for Gustav Bauschke who purchased Wuttig’s copyrights in 1864 named his new acquisition the Schaubek album later in the 1870s, as an anagram of his own name.  Wuttig’s album was preceded by a few months by Ludwig of Leipzig’s German language album.

Among the early American dealers is number 7, S. Allan Taylor (1838-1913), one of the first serious students of locals as well as a famed forger, who published the first philatelic journal in America.

Number 8 is W. Young; partner in the Liverpool firm of Young and Stockall in the early 1860s, which firm published perhaps the best-known English catalog of the 1860s, although little known today.  The firm, founded in 1858, claimed to be the first established in England, a claim disputed by Stanley Gibbons.  Number 9 is J. M. Chute (1846-1892+).  He was an early dealer and forger-member of the ‘Boston gang’ as well as the first elected editor of the American Philatelist in 1886, although he did not serve in that post.  Number 10 is J. Walter Scott 1845-1919) perhaps the best known of the early U.S. dealers and father of the Scott catalog.  Number 11 is Charles A. Lyford, a member of the ‘Boston gang’ of forgers but also editor of the New England Journal of Philately.

Number 12 is Ferdinand Marie Trifet (1848-1899). He was one of the significant early Boston dealers beginning in 1860 as a collector and emerging as a full time dealer in 1866, as well as a short-term member of the ‘Boston gang’.  He arranged the 1876 Centennial Exposition of U. S. stamps.  Number 13 is John W. Kline (1824-1892) of Philadelphia. An adult collector-type before stamps came on the scene, Kline was a major coin collector, selling his holding in 1855 in the largest U.S. coin sale to that date.  He published the listing of early U.S. locals in the 1862 A. C. Kline Stamp Collectors’ Manual and may have been an important early forger.  It is believed he may have been the source for items attributed to Hussey, but not found in the Woods memorandum book of Hussey productions.  Herbert Trenchard published a Kline biography in the January 1993Philatelic Literature Review.  Number 14 is William P. Brown, who lived on until late in 1929 or 1930, and was often touted as the first American stamp dealer. His ‘Philatelic Reminiscences’ of 1892 were reprinted in the September 1987 Collectors Club Philatelist.  He exhibited the Charles Coster locals collection in August 1871.  Number 15 is Leonidas W. Durbin (1849-1887) of Philadelphia, 16 is J. A. Nutter (1849-1910) the first collector of U. S. locals whose teenage collection inspired S. Allan Taylor in his first studies of U. S. locals in the 1850s; Nutter quit stamp dealing in 1867. 17 is G. Steward, Jr., an early Canadian dealer while 18 is E. A. Craig, another little known pioneer dealer.