The points mentioned thus far are sufficient to condemn this cover as fraudulent.  Nevertheless, because of the appearance of the c.d.s. and its bite into the paper, as well as the tie of the SHIP through the stamp, it was felt desirable to go an extra step and check out the handstamp c.d.s.  As noted earlier comparison Mobile/5 covers were obtained for analysis.

Plating the postmark:  Before detailing the handstamp comparisons, several points of suspicion about the Mobile c.d.s. on the 5¢ cover should be noted.  First, there are two small marks in ‘green’ above the c.d.s., about  2mm above the top, and located at a 90° tangent to a line drawn through the diameter of the c.d.s. at the date.  These are not typical markings found on c.d.s. items, but are known on certain types of forging devices, where one has to ‘position’ the device to strike a fake c.d.s.

The second point is the fact that although there is a raised seal on the back under the lower part of the c.d.s., the c.d.s. strike is missing over the seal rather than being heavier struck because the paper was higher.  Normally, the strike should hit the higher portion and then show a gap where there was no back pressure until it hits the paper at the top.  thus, the logical gap should be at about the four and eight o’clock positions, rather than at the bottom where logically the strike should be strong.  These are both suspicious points. 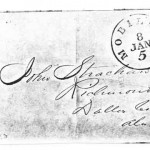 A comparison of genuine stampless covers with the Mobile/5 postmark shows that all have a slanting number ‘5’ at the bottom, rather than the upright style of ‘5’ found on the ‘green Mobile’ cover.  The comparison of letter placement on the January 16, 1851 cover, seen earlier as figure 3, and a blue example of January 8, 1852, shows the strikes are identical.  However, both differ from the ‘green Mobile’ February 2, 1851 strike on the cover under analysis.

The suspect cover has serifs that are a bit too long, the small ‘a’ of ‘Ala’ is of a different shape, as though a clogged ‘a’ might have been used as a model.  The letter position is also slightly different, and the base of such letters as ‘L’ and ‘E’ are too thick.  The ‘2’ in the date of the suspect cover also differed from those of the genuine stampless items.  In the earlier shown figure 4 February 23, 1852 cover, the ‘2’ is rounder at the top than the date slug on the suspect cover. 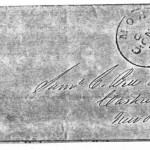 It also has less of a round ball on the front of the ‘2’.  Several other ‘2’s’ were compared, for example the image to the right, and while there are some differences, none had the characteristics of the suspect cover’s date stamp.

When these date stamp differences are added to the fact that the genuine handstamps all show the same ‘5’ ratemark, and that both items differ from the markings on the suspect cover, it seems clear that the 5¢ green Mobile 1847 cover has unique postmarks that must be rejected as fraudulent.  They were probably made from a poor strike model that was photographed and then turned into a rubber handstamp rather than the metal stamp used for the genuine strikes.  The bite into the paper of all the genuine items is similar one to the other, but definitely different from the bite found in the green Mobile c.d.s.—a difference that appears to represent the difference between a metal handstamp, in the case of the genuine, and hard rubber in the case of the fake.

A final, but relatively unimportant question, is whether the cover is completely bogus.  In this regard, it might be noted that the Jarvis correspondence is a recorded one, and that a number of the letters in it come from the lower Hudson valley in New York, which was the home of the Livingston clan.  Thus, it seems quite likely that a genuine piece of correspondence was used.

There are gum soaks in the envelope around the 1847 stamp, that show up when the cover is examined from the inside with light from outside shining through it (a procedure that should be standard for examining covers, particularly suspect ones).  These are often found when stamps are soaked off a cover, and it may be that originally this cover had another 1847 stamp on it which was removed.  However, there are no indications of any postmark, so such a stamp would have had to be a pen cancelled use without c.d.s.  This is not common, but can be found.

However, the Livingston family is known to have used ‘courtesy’ covers, carried outside the mail, to a large extent, and this might just as logically represent such a use with a forged ‘Paid’ added in pen.  The shaping of the letters of the manuscript ‘Paid’ do seem to differ from the letters found in the address, supporting such a thesis.  The question, however, is not worth pursuing, because of the forged nature of the Mobile c.d.s. and SHIP handstamps.

I would conclude that the expertizing bodies involved in examining this item were quite correct to withdraw the initial ‘genuine’ opinion and let the second opinion read that both the stamp and cancellations were fraudulently added.  They probably erred in not labeling the forged postmarks green or bluish green, but this is a very minor point.  What is most surprising is that the item should originally have gotten a ‘genuine’ certificate in light of the obvious signs calling for a very careful examination.   It might be noted that the new Thomas Alexander Census work on 1847s notes the two opinions.