The expert committee involved is consistent in its designation of the cancellation colors as ‘greenish blue.’  It is important to realize why the color is significant.  Green is not a particularly rare color in classic philately, but it has carried a substantial price premium.  This is the consequence of several wealthy collectors having formed collections of green cancels in the past, and having paid premium prices for such items.  (One such collector enamored of green cancels was Marc Haas.)

Because of the lack of interest by wealthy collectors, several rarer colors have not commanded the price premium that would be warranted by their scarcity.  Even the common colors of red and blue can be rare from certain towns.

For example, blue cancels from New York City are very rare in the pre-1856 period.  They were used during the Revolution and again, very briefly, in the 1840s.  Based upon rarity and condition, a blue New York circle of the 1840s should sell for hundreds of dollars, rather than the few dollars it commands.

In the case of the Mobile c.d.s. no other green cancel is known from the town on an 1847 cover, so the color would be worth a substantial premium both for a town collector and for an 1847 collector.  Despite its appearance and the damaged stamp, a green cancel would make this cover an exhibit piece.

There is a problem, however.  It is well known that blue cancels on brown tinted envelopes frequently look green.  Further, some of the inks used in the period give off-shades of green that are not bright and brilliant.  These genuine green cancels don’t have the same appeal than an apple-green strike would have.

Mobile has not been recorded with a green cancel in the 1850s.   The American Stampless Cover Catalog notes that this ‘Mobile 5’ style is known in black and blue in the 1850-1852 period, but does not give precise dates.  (This is still true as of the 1985 Fourth Edition).  Earlier editions of the catalog show only the 33mm blue c.d.s. in this period; it is the addition of the black marking that makes the latest catalog different from earlier versions.

One of the leading students of Mobile was kind enough to loan examples  (seen below) from his collection for use in dating this cover.  Because of this, it is possible to date the blue c.d.s. from 1850 through January 16, 1851—several weeks prior to the subject cover’s c.d.s.—and on until at least February 12, 1851. 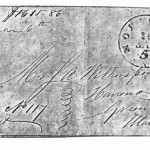 The black c.d.s. is introduced first in 1852, by April 13, 1843, and it is known through December 25th.   Thus we know that blue was the standard Mobile color at the time this cover was sent. 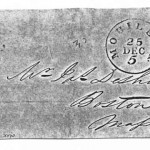 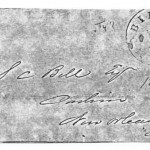 The question of color becames quite important, because we know that Mobile used blue, but have no record of green cancels, in the time period under study.

Further, because of the problems associated with a blue cancel on a brownish cover, it is possible this is not green, but a blue that has changed.  And, since green commands a substantial premium in the marketplace, the question is not academic, but one involving a fair sum of money.

Examined under natural daylight, the cancel does appear to be green.  Nonetheless, this test is insufficient in the circumstances described here.  The expertizing committee apparently compromised by calling the cancel ‘greenish blue..  However, based upon the same evidence available to them—which included a special color study prepared for this cover—I would conclude that green is an appropriate designation.

The special color study was based upon reflective spectrophotometric analysis.  This cover and three other examples generally accepted as green were compared.  One was a Scott #65 with a green cloverleaf, cancel, the second was a #11 with a green cancel, and the third a #11, position 21L3, with a green cancel.  No stampless cover was used.  The basis for comparison was,

That means the color of the envelope was eliminated except as it reflected through the stamp itself.  It should be noted that because the stamp paper was aged and the ink involved was either a blue or green pigment, a shift toward the yellow end of the scale should result.  Consequently, it was not surprising to find the cancel described as ‘grayish yellow-green.’  To the naked eye, the color was found to be very close to ISCC-NBS-gy YG chip #122.  This is a color chip in the National Bureau of Standards color book.

To get a ‘true’ color, the chromaticities of the four items were corrected to eliminate the distortion of the type of paper.  When this was done, the Mobile cancel had a somewhat lower designation on both the x and y coordinates of the graph than any of the other items.  Corrected, the designation for this cancel would be bluish green, similar to the #11 comparison stamp rather than the yellowish green of the #65 cloverleaf and the #11 position 21L3 stamp with a green cancel.