Even The Experts Can—And Do—Change Their Minds

Reconsidering a previous opinion is not uncommon for an expert committee, or even an individual expert.  The usual reason is that new information has turned up, 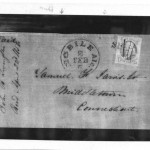 but other elements can also prompt a reconsideration.  In the past few years, a particularly interesting reconsideration involved the cover illustrated here. This cover had received one, if not two, ‘genuine in all respects’ certificates from one of the better-known expert committees.

The problem with this certificate at the time was the description of the color.  Some believed that the color on the cancel was green, not greenish blue, and the experts were asked to reconsider the item on this basis.  To aid the reconsideration, additional research was done on the color, and a color study was submitted along with the item.

The result was surprising.  The opinion changed dramatically, and a new certificate was issued that reaffirmed the ‘greenish blue’ postmark, but added that both the handstamp circluar date stamp (c.d.s.) of Mobile and the tying ‘SHIP’ were ‘fraudulently added to an otherwise genuine cover.”

Because expert committees do not give detailed analyses of their reasoning, I was asked to ‘reconsider the reconsideration’ and confirm or deny the new opinion with a detailed write-up.  It is the process of this reexamination that is offered here as an aid to understanding the procedure of evaluating a cover.

The cover in question is a darkish brown envelope addressed to Samuel F. Jarvis, Jr., Middletown, Connecticut.  In similarly shaded handwriting but without the flowing characteristic of the address, is a handwritten ‘Paid’ at upper left.  In a still different hand in docketiing at the left there reads, ‘John R. Livingston/Rec’d April 22d 1851.’  On the back of the cover is a large wax seal in red, positioned behind the address and under the lower portion of the c.d.s., 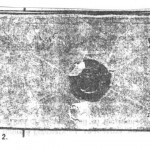 The cover bears a red brown 5¢ 1847 stamp that is faded or bleached, and which has a tear extending from above the second ‘F’ of OFFICE to below the ‘N’ of CENTS—so that the stamp is, in effect, torn in two, and not just with a vertical tear at top.

There are three vertical pen strokes ‘cancelling’ the stamp.  The one at the left is in a darker shade of ink than the other two, and the one at the right runs almost in the groove of the tear in the stamp.

The stamp does not ‘pop’ at the corners, rather it is relatively firmly affixed, and pressed into the cover.  The lower right corner, however, is slightly loose, and looking under the stamp there, one can see that the underlying color of the envelope is a lighter shade, as would be expected if the stamp had been on for many years.

In the center of the cover is a 33mm c.d.s. reading MOBILE, Ala/2/FEB/5.  This cancellation has a break in the outer rim between the ‘L’ and ‘E’ of MOBILE and again at the bottom, from about the five o’clock to the eight o’clock posiition.  This bottom break is directly over the red seal on the back.

The stamp is also tied to the cover by a handstamp 12 x 5mm SHIP in the same shade as the c.d.s.

There are two basic problems associated with this cover: first, the color of the cancel, and second, the authenticity of the cover.  Are the cancels fraudulent, as alleged by the expert committee; are they genuine; or is the entire cover bogus?  These two problems will be examined separately, as both offer interesting insights for both collectors and cealers to consider.