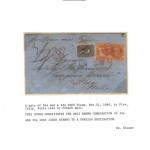 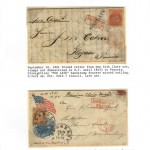 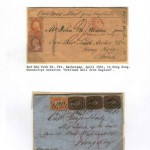 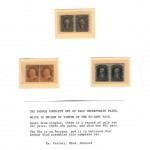 mber speaker was Peter DuPuy, who showed a revised new version of his Belgica international gold medal collection of the 30 and 90¢ 1860 issue. A surprise start was a showing of the two largest multiples of the 24¢ value, a block of 22 and one of 20. He began his showing of the 30¢ with several Scott unlisted or very rare proof or essay items including the black trial color discussed in Steinmetz Miscellany, one of our early data sources presented at the 1913 exposition. He also showed the plate proof in blue and the listing pair on India as well as a large die. In issued stamps he showed two of the blocks of four as well as the ex-Klein block of nine. In colored cancels he showed all but the violet; there was also a supplementary mail 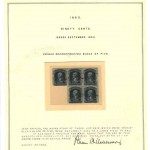 In early uses he showed a cover from the St. Francis Hotel in San Francisco that transited New York, September 9, 1860 marked PAID THRU by Wells Fargo (not on the enclosed photocopies). A selection of destinations is enclosed on the photocopies. Not shown is the ex-Starnes cover of November 2, 1860 to Alexandria, Egypt. It went on the 11/3 trip of Hapag’s Borussia to Hamburg. Also not shown is a San Francisco cover to London of 9/2/61 using the 30¢ to overpay the 29¢ Pacific Coast rate. In selection covers for the leave-behind I also omitted the ex-Krug 45¢ rate ‘Payen’ cover to Lyon, France. Four German covers were also omitted. One was meant to go on the Cunarder Asia but missed and went on the NGL’s Bremen of September 29, 1861 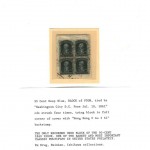 and got a TOO LATE handstamp. The second was on a multicolored ‘Death to Traitors’ patriotic version of Walcott 2438 from Alleghany, Pa 6/12/61 that went on Hapag’s Hammonia via Hamburg to Wurttemberg. Another was a Prussian Closed Mail cover to Frankfurt with a blue Bremen transit that went on the NGL New York sailing of 2/23/61 as far as Southampton (where the ship went into dock for repair). Another omitted item was from Little Rock, Ark. Via England to Leipzig that went on the Cunarder Africa of 4/10/61 to England and on via Aachen. The final omitted item was the only known combination of the 24¢ and 30¢ to a foreign destination (Italy). This cover 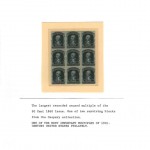 paid quadruple the British open mail rate of 21¢ to Pisa, Tuscany and sailed on the Cunarder Persia November 21, 1860 from New York. It was misdescribed on the exhibit page as a French mail quadruple rate.
In the 90¢ value, Mr. DuPuy showed nine trial color proofs, one more than Scott lists; it additional is a dull violet. He then showed the two largest recorded surviving blocks both ex-Caspary (lots 816 and part of 817 positions 43R1-45R1/63R1-65R1). The original had a number of missed perforation holes, a number of which have now been punched. Can you spot them? Ishikawa and Klein only had blocks of four. In cancellations he showed the only known fancy cancel (New Haven circle of diamonds) as well as a piece with the 30 and 90¢ and the largest recorded piece (the handful of full covers catalog at $225,000 each). He showed the unique used block sent from Washington D.C. to China, ex Ishikawa which Scott catalogs at $45,000. There is a special footnote in the Scott Specialized about it.

The last two items were the 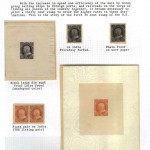 reconstructed block of five and the only recorded complete set of imperforate pairs of the 1875 reprints. This set was ex-Ferrari and Hind, who assembled it. There exist two 24¢ pairs, three 30¢ and 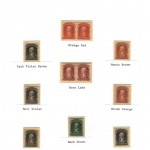 only this one 90¢ pair, which Scott doesn’t price as it has only been available in a set for over 70 years. There was an extensive Ashbrook write-up on the reconstructed block of five, which was too long to include so I’ve summarized it. Ashbrook pointed out the dull blue shade is typical of used copies rather than the bright blue of most unused examples. The latter came from the remainder files of the POD when they were returned from Southern postoffices in 186l and were given a stamp dealer as payment for his work in arranging the government stamp collection. Ashbrook indicated his belief the color difference between used examples and the remainders was caused by different batches of ink rather than exposure of the used examples. He also noted that a sheet of the remainders was given ruled pen lines in red and made as presentation copies to various officials. (Henry Stollnitz had an example). Ashbrook noted the strip of three in this reconstruction was ex-Needham and Ackerman, whence he acquired it from Perry. He then acquired the pair from Krug who got it from Ward who acquired it from the Wolcott holding. Ashbrook reassembled it and it then it was sold to Neinken. Ashbrook indicated his belief that it originated in Shanghai and paid a rate of over $4.50. 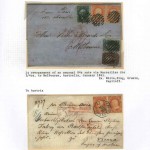 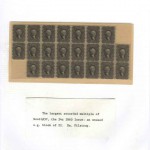 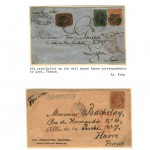