The District of Maine 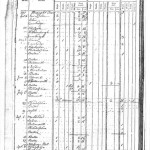 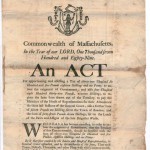 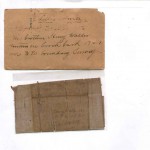 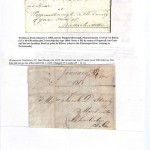 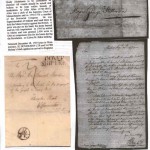 Most talks on collections created on a postal history basis, especially to such experienced philatelic citizens, such as your selves, are based on rate periods. I have decided to take a slightly different tact. I have elected to give you a social and political history of the area which became the State of Maine on March 15, 1820, as well as the postal history of the area. It is a political tale of greed as well as righteous hopes and plans.

In most histories the phrase ‘permanent settlement’ means Europeans settled there for more than ten years with no interruptions in resident status. It is commonly held that the first permanent settlement of the area was in the Pemaquid area, the Popham colony, in 1607. This ignores the fishermen homes and temporary residences in St. George, Saco and several other coastal settlements. It also ignores the Viking forays and the Native Americans.
The victory gets to write the history, so we will continue with the French and British viewpoint.

In 1605, the French, under leadership of Champlain (and two boats with over 80 settlers) established a settlement on the island of St. Croix, three miles offshore from Red Beach, (and still part of Maine); they also established a missionary station on Mount Desert island in 1609. The few who survived the winter moved to Nova Scotia, to an area now called Port Royal.

Two years later, in 1606, based upon the same premise that ‘you live there, you own it,’ the British attempted a settlement at Popham, at the mouth of the Kennebec, under the aegis of the Plymouth Company. The colonists returned to England in the spring of 1608.

Ferdinando Gorges and George Mason got a grant from the New England Council (successor to the Plymouth Company) for the area between the Merrimac and the Kennebec, which was name the Province of Maine. In 1639 a royal charter for the Province and County of Maine was granted Ferdinando’s kinsman William Gorges. However, the French had not relinquished their claim until the end of the French and Indian War.

As you can see, the area which was to become Maine underwent the same ownership squabbles as much of the colonies, namely England and France duking it out over governance of the land.
But, Massachusetts Bay Colony also wanted a piece of the pie. They wanted to assume control of Maine. They wanted the natural resources (Maine was the source for the timbers that build the English navy and the ‘Mast Fleet’ sailed back with timber once or twice a year); they wanted to convert the settlers to Puritanism; and they wanted to win land from the French.

In 1680, 118 residents of York, Kittery and Wells petitioned Charles II, asking to be delivered from the domination of Massachusetts Bay. The separatists’ movement begins! During the Revolution, the town of Falmouth (now Portland) ardently resisted the British claims and was bombarded and burned in the same year (1775) that Benedict Arnold led an expedition to capture Quebec for the Americans across the Maine wilds and nearly succeeded. British forces occupied Castine, Me from 1779 to 1783.

Maine was still treated as an integral part of Massachusetts throughout the Confederation period and it wasn’t until May 1, 1790 that the Commonwealth of Massachusetts was established with a designated District of Maine, under its governance. There were 12 postoffices in what is now Maine that existed between 1775 and 1793 (see “The Post Office During Confederation Part I” Collectors Club Philatelist January 1981 page 36 with the expansion into Maine discussed in Part VI pages 427-431 of the November issue).

In his 1994 book Postmasters & Postoffices of the United States 1782-1811 Robert J. Stets gives additional correspondence and offices on pages 126-133. This listed 165 postoffices during the District of Maine period of which private post riders who were paid by the patrons initially handled two (Georgetown and Thomaston). There was a post road from Passamaquoddy to Portsmouth by 1795.