There are two main features of the print that help determine the type of printing method used: how the ink lies and variations in the printed lines.

How the Ink Lies

Relief printing: The pressure of the raised printing surface pushes the ink into a rim around each printed surface (“ink squash”). The rim is most easily seen where a small patch of printed ink is surrounded by a large area of white. As there is greater pressure at the extreme edges of the image, the corners of a black printed frame are a good place to look for this dark rim.

Intaglio: Depending on the strength of the print, there may be a palpable depth of ink found in the darkest lines of the print. The paper on the reverse side may sometimes be felt as slightly embossed. In a good impression, the darker lines might appear as visible edges of ink.

Relief: The printed lines seem to have arbitrary variations in width. The white (non-printed) lines may seem straighter than the black, printed lines. One test is to imagine anyone drawing or engraving the more oddly shaped individual black lines in a print.

Intaglio: The engraved lines are often pointed at each end and may appear to swell and diminish during their length. Lines often appear very straight, as if drawn.

When it comes to determining the printing method used to produce a particular illustration, there is a fair amount of controversy and misunderstanding among both collectors and dealers. For example, illustrations on covers are frequently referred to as engravings or woodcuts when, in many instances, they are neither.

Part of the problem lies in semantics. When most collectors refer to engravings, they think of finely detailed prints made by the intaglio printing process, such as postage stamps and bank notes. In reality, relatively few illustrated covers and lettersheets were produced by intaglio printing, largely because of the high cost of this process.

To the left, is an example of a 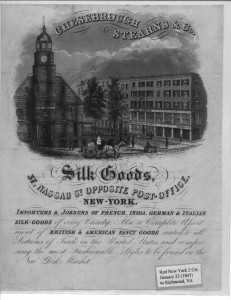 While some of the earlier illustrated lettersheets may have been printed with woodcuts, this was not a practical method for printing large quantities of illustrated matter. As the production of a woodcut involved the cutting away of material around the design to be printed, the physical limitations of the wood allowed only for a relatively simple picture with clear outlines. Repeated printings would lead to the breaking and degradation of the relief lines. As a result, wood engraving became a more popular form of printing, as it produced illustrations that were much finer in detail than the cruder woodcut. In fact, wood engraving may have been the predominant form of printing used to illustrate books, catalogs, circulars, handbills and newspapers during much of the nineteenth century. 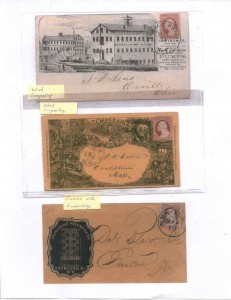 by wood engraving. The top cover shows an elaborate scene at the Cowing & Co. pump factory, at Seneca Falls, N.Y. The second cover, entitled “Intemperance is the Bane of Society”, shows an intricate illustration of both the perils of drinking and the virtues of intemperance. The scenes on the left side illustrate the horrors of drunkedness, including fighting, trips to the pawn broker and, as seen in the upper left corner, the ultimate end on the gallows! On the other side (the right side, of course), those who practice intemperance can look forward to a wonderful family life. The cover has a Bristol, NH datestamp and the three cent red stamp is cancelled with a PAID 3 in a circle.

The bottom cover on right is a cameo illustration for the Peoples Stove Works in New York City. This cameo is partially embossed. 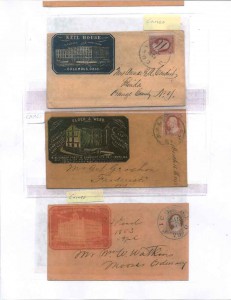 Next, the covers to the left, show three more covers with cameo illustrations. All of these cameo covers are franked with a three cent 1851-57 issue. The top one shows the Neil House of Columbus, Ohio. The middle cover shows the warehouse of merchants Elder & Webb of Baltimore, MD. The bottom cover is a red cameo of the Exchange Hotel in Richmond, VA.

Invented in 1798, the lithographic process was an entirely new form of printing and was quickly put to commercial use. As a result of its low cost of production, it became a widely used process in the printing of illustrated envelopes. A good lithograph may look very much like an intaglio print and is sometimes mistakenly described as the latter in auction catalogs. The main difference between the two is that the lithographic design lies flat on the envelope while the intaglio design should show a raised effect, which can actually be felt in some instances. Careful examination under a magnifying glass may also reveal the more detailed lines of the intaglio printing.

The figure to the right shows some nice examples of illustrated covers printed by lithography. 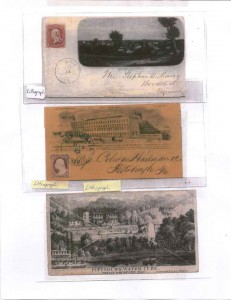 The top cover shows a delicate pictorial of Elgin, Illinois. The three cent stamp (#65) would indicate usage around 1861-65. The middle cover shows a lithographed illustration of the stove and iron works of Chamberlain & Co. Close examination reveals a very finely detailed print, similar to an intaglio engraving. The correct determination of the printing method is aided by the notation “Gibsons, Lith.” in very small letters at the lower left of the illustration. The three cent stamp is tied by a blue Cincinnati, Ohio datestamp. The bottom cover has a wonderful overall illustration on its back, depicting the Pittsburgh Water Cure. The picture includes a nicely detailed steamboat, a locomotive and a large fountain, among other things. The front of the cover is franked with a three-cent red stamp (#26).