15. This next circular has no year

date marking but appears to have been used in the early 1850s. It bears a CDS of West Townsend, Mass. and a “Paid” marking. There is no specific rate marking, but the lack of a rate marking is fairly common with printed matter mail. It was likely charged one cent postage. This circular shows a fabulous engraving of the Townsend Female Seminary, including many different buildings.

The use of envelopes also became very popular in the 1850’s and businesses began to make extensive use of illustrated envelopes.

16. This example from the Rhode Island Seminary, used in 1858, bears a perforated one cent Franklin stamp neatly tied by a North Scituate, R.I. CDS. The advertising in the box on the front of the cover lists the names of the teachers at the school. The back of the cover shows a beautiful, overall illustration of the seminary building and grounds. You might notice that the envelope flap was not sealed and is merely tucked into the envelope. It was always required that printed matter be sent in unsealed folded letters or envelopes, so that postal employees could verify that the item did not contain any hand-written messages.

17. The following circular was sent from New York to New Salem, Mass., and bears a 1 cent Franklin stamp. The stamp is tied by a New York 1859 CDS. The circular contains an advertisement for a wholesale dealer in tea, located on Greenwich street. The illustration shows the dea 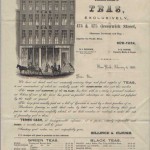 ler’s building, including the many cartons of tea stacked up in front of the store.

18. The next item is a circular for the Middlebury Academyof Wyoming, NY, announcing the dates of the school terms beginning in August of 1861. The impact of the beginning of the Civil War is reflected here, as the circular mentions the “young men” who have “responded to the call of their country”. The circular is franked with a one cent perforated Franklin stamp of the 1857 series. What’s interesting here is that the circular is datelined August 5, 1861 and the stamp was postmarked November 14. As all stamp issues prior to the new 1861 issue were demonetized in August of 1861, the use of an 1857 stamp at this time was a very late and illegal usage.

19. To illustrate this rate, I have a prices current used from Baltimore in March of 1864. This circular was used with a two cent Black Jack stamp.

The Act of June 8, 1872 reduced the circular rate back down to one cent, for each two ounces of weight.

20. While the next example isn’t really a circular, it’s a good example of the printed matter rate. Clark’s Cleveland Almanac of 1873 was produced by the chemical firm of R.C. and C.S. Clark. They produced Clark’s Anti-Billous Compound, which was typical of the “wonder” medicines marketed in the late 1800’s, before the Pure Food and Drug Act eliminated most of these frauds. As described on the back cover, this compound possessed “astonishing power to remove disease”. The contents of the almanac contains many advertisements and testimonials for this drug. It also describes many of the diseases and conditions known in the late 1800’s, including scrofula, catarrh and salt rheum. There is no townmark, but we can assume that it was mailed in Cleveland with a one cent Banknote series stamp.

21. The next circular is also from a manufacturer of medicines, Dr. Radcliffe’s Family Medicines. The envelope shows a large, overall illustration, in green, of the company’s building and other adjoining buildings. Enclosed is a circular with the same, matching illustration in black. Particularly interesting is the legend at the left side of the envelope, which states that “If not called for in 10 days, the Postmaster will please give this circular to some live, active man, who will take hold of a good paying business, requiring small capital.”

22. The next item is an illustrated circular for the Northwestern Ohio Normal School. It sent from Ada, Ohio in 1880, b 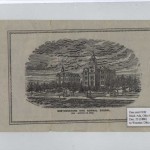 earing a one cent Banknote series stamp. The circular include a wonderful, full page illustration of the school and campus. It’s interesting to note that, under the school’s “one year plan”, $105, paid in advance, would cover 47 weeks of tuition, including room and board!

23. The following illustrated envelope is a good example of the one cent circular rate, sent in 1886. It originally contained a catalogue for a dry goods store. It’s quite an ornate envelope and includes a nice view of the business.

24, 25. The last two covers are examples of the one cent circular rate sent from Philadelphia to New York City in the late 1800’s. They make a nice pair, showing a very large and elaborate view of the lumber depot of AJ. Geiger. 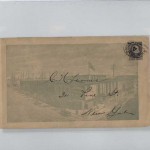