6. The next circular depicts a wonderful illustration of an umbrella manufactory, along with all of the activity on the 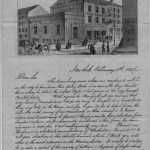 streets, including horse-drawn carriages and a number of people carrying parasols. John Smith’s manufactory was located on Pearl St., in downtown New York City. While the circular is dated February1, 1847, it was actually postmarked on March14, with the large New York 2 cent CDS.

This circular was mailed out just in the nick of time, as the Act of March 3, 1847 raised the circular rate from 2 cents to 3 cents. While the effective date is not entirely clear, the earliest known example of this rate is postmarked on March 17, 1847. This act also required that circulars be prepaid at the time of mailing, since many circulars that had previously been sent unpaid were refused by the addressee. It seemed that many people had a problem with paying the postage for their junk mail!

7. The next illustrated circular is datelined April 19, 1847, but is postmarked with a Boston 5 Cent CDS. It was rated 5 cents instead of 3 cents, as the second page of the circular contains 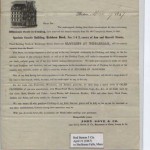 a hand-written letter. As noted before, letters sent at the circular rate could not contain any additional writing, although there are some examples where a few words were successfully included. This circular shows the new offices of John Gove & Co., who were wholesale dealers in clothing.

8. This circular advertising shoes made from Goodyear rubber is a good example of the 3 cent circular rate. Mailed in September, 1848, it was struck with a large red New York Paid 3 Cent CDS. This circular also has a black circle marking with the word “circular”. Within the circle is a diamond enclosing the word “paid”. This is not a common marking.

9. The following circular is dated November 7, 1850 and was actually postmarked on that date, with a blue Philadelphia 3 Cents Paid CDS. The circular refers to the sale of a firm’s entire wholesale and retail stock of hardware and cutlery. You’ll note that the circular states the goods are “slightly damaged by fire”. Clearly, this was an early example of a “fire sale”. 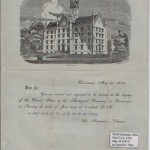 The next circular is datelined May 30, 1851 and shows an illustration of a theological seminary. It is postmarked   with a Cincinnati Paid 3 Cents CDS. This an invitation to the laying of the seminary’s cornerstone.

11. The following circular advertises the fourth annual exhibition of the Maryland Institute for the promotion of the mechanic arts. The circular describes the upcoming exhibition to be opened in October, 1851, including a request for exhibitors of industrial products. The 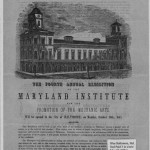 top of the circular shows a large illustration of the exhibition hall, which was then in the process of completion. The cover is postmarked with a blue (May 24th) Baltimore CDS and a red “Paid 3” in a circle. This is a very early advertisement for an exhibition in the U.S.

The Act of March 3, 1851 (effective July 1, 1851), represented an important change in overall postal rates. The act reduced the cost of a prepaid, first class letter to 3 cents, for all distances up to 3,000 miles. If not paid in advance, the letter was charged 5 cents. In essence, the Post Office wanted to actively encourage all patrons to prepay their mail. While all regular letters travelling less than 3,000 miles were now not subject to rates that varied by distance, the opposite was true for circulars. Instead of a single, 3 cent rate, the new circular rates varied as follows:

12. The next circular, from an importer of dry goods, depicts a pretty scene of lower Broadway in the early 1850s. The circular was sent from New York City to Chesterville, Ohio in January of 1852. It bears a red New York Paid 2 Cts. CDS. 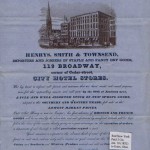 As Chesterville is slightly more than 500 miles from New York, the circular was rated 2 cents.

13. This circular for Stuart’s Steam Refined Sugar, mailed in April, 1853, shows the new one cent rate. It’s marked with a red New 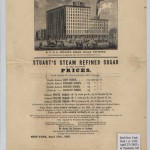 York Paid 1 Ct. CDS and was sent to Ypsilanti, Michigan. The circular shows a nice view of the sugar refinery, which was located on Greenwich, Chambers and Reade streets.

14. The next advertising circular is one of my favorites. It shows an entire page of illustrations, including views of the

front and back of thedry goods store that sent out the circular. But instead of just showing the store itself, it shows entire city blocks! This includes two views of the Astor House, the American Hotel and St. Paul’s Church. It’s one of the most detailed illustrated lettersheets I’ve come across. Mailed in February, 1853, from New York City to Salem, NY, it bears a red New York Paid 2 Cts.CDS. While the typical charge at this time would have been 1 cent, the higher rate of 2 cents may indicate that this circular contained some additional printed matter.