Mike Heller, the speaker for March, gave a presentation on illustrated circular mail (which could have been retitled “Junk Mail of the 1800’s”). The talk began with a review of the postal laws in effect prior to 1845, with some examples of early circulars. As the change in postal rates in 1845 introduced lower rates for circular mail, this served to increase the number and variety of printed matter entering the mail stream. Mike showed many examples of illustrated circulars, many depicting buildings and associated street scenes. One of the nicer examples showed a beautiful engraving of the New York City post office, while another showed an entire page of buildings, including the Astor House and the American Hotel. Mike reviewed the various rate changes in respect to circular mail through the late 1800’s. Cal Hahn also brought a number of examples of early stampless circular mail, including one of the earliest printed notices.

While this talk was originally entitled “Illustrated Circulars”, I decided to rename it “Junk Mail of the 1800s”. I’m sure most of us throw out our junk mail as quickly as we receive it, and this type of mail was probably handled in a similar way, one hundred to a hundred and fifty years ago. Luckily for us collectors, a few people and businesses actually saved their junk mail, allowing us to enjoy today’s topic.

As many of your know, postage rates for regular mail prior to 1845 varied with a number of factors, including the distance that a letter was to travel, the weight of the letter and the number of sheets of paper enclosed in the letter. While newspapers, magazines and pamphlets enjoyed reduced rates, there was no special rate given for printed matter, such as advertisements and circulars distributed by businesses. With few exceptions, printed circulars were charged the same rates as applied to all regular mail.
We have a few examples here of pre-1845 circulars:

1. The first is a folded letter containing a “prices current” from Fitch Bros. in Marseilles, France. A “prices current” was a printed notice, published at frequent intervals by merchants, that informed their customers of the latest prices of commodities. This circular is dated August, 1826 and was mailed to Boston. It shows the prices of many different types of imported items, such as candles, cocoa, coffee, flour, silk sugar and whale oil. This cover was apparently carried outside of the mail stream until it arrived in Boston, where it was handled as a “drop” letter. Letters dropped in the mail at the post office, to be picked up by individuals who lived in that city, were charged only a penny. Such letters often show no rate markings and only a ‘PAID’ marking, as illustrated here. 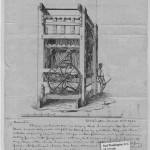 Improved Cotton and Hay Press” and illustrates the cotton press in great detail. Note the picture of the slave standing next to the press. Illustrations of slaves are relatively scarce. With the act of March 3, 1845, postal rates were drastically changed. Effective July 1, 1845, the cost to mail a single letter dropped to five cents for distances up to 300 miles and 10 cents for distances in excess of 300 miles.

The development of lithography made it possible for business to print up large quantities of advertising circulars at relatively low costs. With the growth of American industry and need to advertise their wares, the business community pressed for lower postal rates for printed matter.

In response to these needs, the new postal law provided for a special rate for printed or lithographed circulars, handbills or other advertising material. The rate was 2 cents for each sheet, regardless of distance. As with regular mail, it could be sent prepaid or collect. To qualify for this lower rate, circulars generally had to be sent unsealed and could not contain any additional writing. If there was any writing on the circular, it was treated as ordinary mail.

3.  The first example of this rate is a circular containing an advertisement for a newly patented carriage wheel. It was sent from New York City to Norwich, Mass. in February, 1846, and is postmarked with a large New York 2 cents CDS. 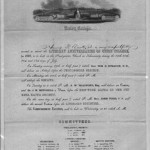 cript. It was an invitation to attend a literary anniversary at Union College. The circular includes a beautiful engraving of the Union College campus at the top, showing the various buildings and grounds. This illustration was engraved by Rawdon, Wright, Hatch & Smillie, who engraved our first postage stamps just a short while later. Union College is one of the oldest colleges in the country, founded at Schenectady in 1795. It’s now part of Union University.

5. This circular was sent from New York City to Richmond, VA in January, 1847. It was prepaid and postmarked with the large NY CDS with the integral 2 cent rate. It’s 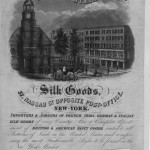 one of my favorite circulars, with a beautiful engraving of the downtown NYC post office. It also shows the offices of Chesebrough Stearns & Co., importers of silk goods, located on Nassau St.