This meeting took place December 12, 1997 and was attended by Gene Reed, who came up from New Jersey, along with Gerald Moss from Delaware.  Moss showed four covers from the Tredegar Iron Works of Richmond—the key source of cannon for the Confederacy as well as the iron plates used for the Confederate iron clad, Merrimac.  Helen Galatan Stone showed her Philadelphia illustrated covers, while Ted Israel showed an interesting selection of Confederate provisionals and handstamped paids, going into the history of several of these.  In this respect Calvet Hahn had several examples of handstamped Paids that were currently going through the expertizing process of the CSA and the PSE committees, which showed members some of the analytic approaches taken by the various expert committees to ‘authenticate’ a new provisional.

Hahn also made a presentation of ‘death’ as a topic, showing an eye witness account of the Battle of Long Island in the revolution and reports of deaths in that battle, the well-known George Turner’s ‘death’ cover of 1812, one of the earliest handmade U.S. black border mourning covers, a Boyd ‘free’ to the newspapers cover with a poem on the ‘death of a bird’, a Harnden card used to carry a coffin back from the Civil War battlefield, several express company examples carrying ‘sickness and death’ news and Julia Grant’s franked mourning cover.

Following the retreat from Boston, Sir William Howe took his troops to Nova Scotia beginning March 17, 1776 and then from there to New York arriving in the Narrows July 2nd.  He landed 15,000 men on Staten Island, which was to become the British base to capture New York.  On August 22nd, the troops were landed at Coney Island and began their march north through Brooklyn to the Battle of Brooklyn Heights.  By noon on the 17th, Henry Clinton and Lord Cornwallis turned the American lines at the Heights and the Americans lost half their forces.

Clinton rather than attacking decided to besiege Washington, who under the cover of night on the 29th withdrew across to Manhattan, preserving a large portion of his army.  New York, however, was untenable with Brooklyn Heights in British hands and Washington gradually began to pull his forces up into the northern end of the island preparatory for the forthcoming battle of Washington Heights, near Columbia University today.

The British crossed the East River at Kip’s Bay, location of Postmaster General Finley’s summer home and a few blocks south of the Collectors Club. The nearly trapped Washington as he moved his troops up Broadway; however, the legend goes that the officers of the British forces stopped at the Murray plantation for tea (the Collector’s Club is located on Murray’s Hill) and the bulk of the American forces successfully reached Harlem.

The letter shown was written at New York September 1, 1776, immediately after the fall of Brooklyn. It needs to be remembered that there was no dictionary at this time and writers wrote as they spoke, accent and all.  Samuel Johnson’s 1755 dictionary in England had not really penetrated America and was more an encyclopedia than we consider dictionaries today. Webster’s firs American dictionary was still decades in the future (1828).  The text is transcribed as best I can read it. Note the double ‘g’ in Long Island a typical New York pronunciation as well as other accents as spoken. Note also the old style of capitalizing important words, typical of writing in German.

…after weighing…you and my Dear Children the best heavens… I want (to) let you known that through Divine Goodness I am in Health and high Spirits, enjoy myself better than I expected but were it not for Doing my Country’s Service and all’s laying att stak, I could not Content myself in a campain but I hope that the Militia will be Release soons but I fear not till December—It seems to be we shall have a general action fight and what the Consequence will be God only knows.  Our Army is retreated from LonggIsland to Governor’s Island brought off those with baggage and artilliary with Little Loss.  Some killed or wounded going but ye next Day—our Army is healthy Considering what numbers there is and the time a year as to particulars respecting the fites on LonggIsland I can’t give the particulars; you will have it in print. Great numbers are slain or taken prisoners.

Among the dead my kinsman William Gaylord was killed in the retreat.  Enquired in a few moments after he was shot.  Lieut. Gillet tis said was wounded or taken…Maggy and it’s supposed is Dead, killd or drowned making…(his way over from Brooklyn?) his Ensign .han’t time to mention any more of my acquaintances.  And to not from this place—Huntington’s Regiment, ‘tis said’ are all cut off but seventy or eighty but hope it’s not so—one man killed today.  Another had his thigh broke up by the fire from the ships.

My Dear—After I began this Letter I received A payment by Avon Still for wich I give you thanks for the may kind enq…of your Care towards me—A pretty team in my eyes when you said in one of your letters that my Children remembered how Dada looks—Dear Children I can see how you all Look—I did not Know how near you and my Children were till I bid you farewell—to Look Death and Danger in the face—my friend Don’t trouble yourself with what may happen–pray for me and let us put our trust in that God who has been our Guardian this far in life.  He is still abel to protect us amidst a thousand dangers—which I had a much more ratifying sample of it, as to my business you must Doe the best you can get some grain sowed if you can.  I fear there will be almost a famin for bread another year.  As to the …you must advise with brother Cotton. I shall…Continually pray Brother Cotton in my name to help me some or help procure some help.  If you want Mutton kill a fat weather, A lamb if you Chose it.  Their wool is best.  As to the apples do thed best you Can.  Lett ye Children and Uncle Samuel if he is Able fetch some of them up.  Perhaps Somebody will make them on Shares as to Cloaths I have enough for the present.  I sent back my best Coat by Prentice Mossrier att New Haven as to Soupe I have it every Day meat plent on that which is good all sorts of Garden heanks so to be sold att ye MARK-Y. Can have as much Sage for one Copper as I shall up in three Months (his militia enlistment).  All sorts of Gardin att Medicinal harbor side here but…rums has been for 2/3 a quart and we have had plenty of Cyder for 4d a quart.  We have had 5 barrels in this Company and divided it.  I have Lived well.  As to our Company I shall say nothing about them as individuals.  You will hear by Mr. Steill (Steel).  Seven or reight  (note the ‘r’ pronunciation) unfit for Duty.  None Dangerously Sick.  I hope we have not Lost one out of the Regiment yet—one out of Farmington Reg’t of Militia buried yesterday—Tullan by name—I see Josian Gaylord yesterday.  He is well—Desired I would sent to his Father the first opportunity and acquaint him of the Death of his Brother—he wants his Father sould come to see him—you will send to him as soon as you can.  I have sent you four letters with this. I haven’t one to the Children.  I must Leave writing least the bearer should be gone.  He went out a while last nite—My love to my Familly.  Complements to friends and accept much love to yourself.

From your Constant Husband.

P.S. I have sent one letter to Brother Cotton and one to Sister Wells.  When you wright take a whole sheet write on half that I might have the rest.  I have but one shete lefte.  Write as you can, it is a greate pleasure to receive a line from you.  I shall want to hear from uncle Samuel and know how he does in my Absence.  I don’t Doubt you will be as kind to him as of the Children.

Note also the different spellings of ‘write’ and ‘sheet’ showing the inconsistent spelling of the period.  I also have a letter of August 23r, 1776, which discussed the landings on Long Island.  Gaylord noted that there were problems in the Connecticut mail as early as July 19th, as General Washington told Governor Trumbull.  This earlier letter of Gaylord’s discussed the prospect of a siege and the use of tea in New York City—his first taste of that beverage.  It reported the British landed at Coney Island on the 22nd—5,000 troops with several American regiments going to meet them—The Chester regiment is ordered over.  He noted that Col. Gay died on the 22nd.  He also noted that New York City has but one well!

This ‘death notice’ cover with its inked DEATH from Ipswich, MS. in 1812 was the key piece in the late George Turner’s ‘death’ collection.  It may be the earliest originating in the U.S. although European mourning envelopes wee used to America in the 1780s, for example one from Holland in 1782.  It is certainly one of the most distinctive of such covers.

One of the very earliest of the American mourning band covers is this example from Salisbury, N.Y. in 1818 with its hand-inked border.  It is addressed to Russia, N.Y.—one of three Herkimer county New York towns named for countries (post office in 1809).  The others are Norway (1813) and Poland (1829).  All are named for the Napoleonic battles as the Bonaparte family invested in American land grants in New York.

Almost four years after President Grant’s death, his widow was still using the medium wide mourning envelopes of the Victorian period.  Only the royal mourning covers normally use a wider mourning band. 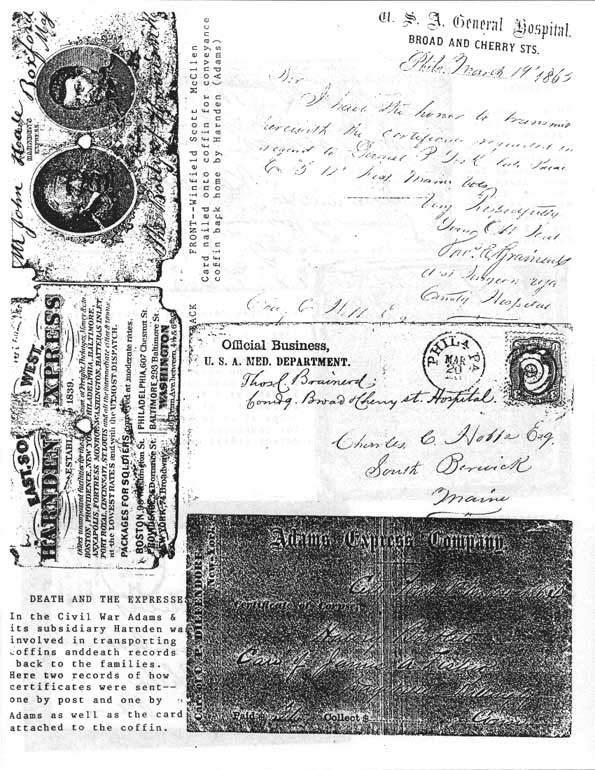 DEATH AND THE EXPRESSES

During the Civil War the Adams Express company and its subsidiary Harnden were involved in transporting coffins and death records back to the families.  First is a Harnden Express card that was attached to a coffin to be carried back home. The face of the card depicts Winfield Scott and McClellan; the back shows services for soldiers provided by Harnden. Second are two records of how death certificates were sent—one by post and one by Adams.  The letter by post was sent from the U.S.A. Hospital at Broad and Cherry Streets in Philadelphia March 19th, 1865. The one sent by Adams was posted at City Point, VA March 24, 1864 and was prepaid 3/-.  It is addressed to Killingly, CT. via New York.

This was called ‘machine poetry, and was a poem on the death of a favorite bird that was sent FREE by the Boyd’s local to James Gordon Bennett’s New York Herald newspaper.  It is a typical example of a local post giving free delivery mail to newspapers. I have not found them as scarce as reported in the literature.