Note also the different spellings of ‘write’ and ‘sheet’ showing the inconsistent spelling of the period.  I also have a letter of August 23r, 1776, which discussed the landings on Long Island.  Gaylord noted that there were problems in the Connecticut mail as early as July 19th, as General Washington told Governor Trumbull.  This earlier letter of Gaylord’s discussed the prospect of a siege and the use of tea in New York City—his first taste of that beverage.  It reported the British landed at Coney Island on the 22nd—5,000 troops with several American regiments going to meet them—The Chester regiment is ordered over.  He noted that Col. Gay died on the 22nd.  He also noted that New York City has but one well! 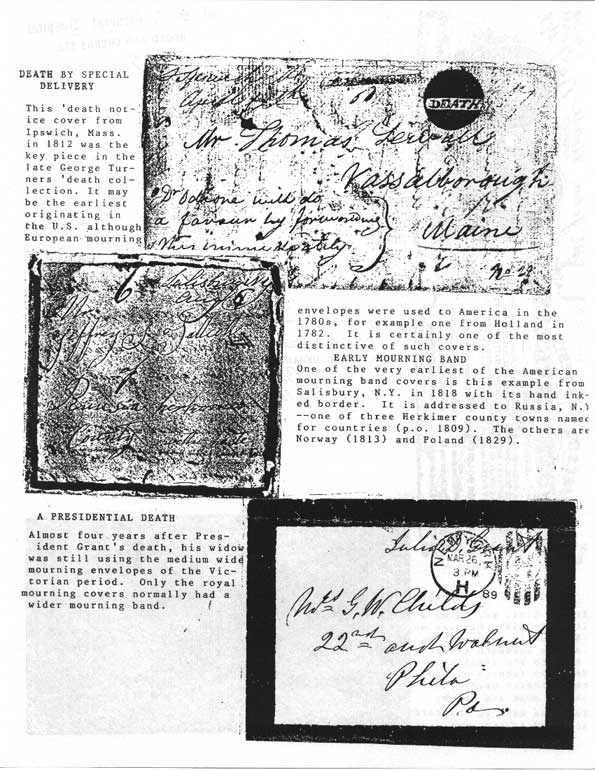 This ‘death notice’ cover with its inked DEATH from Ipswich, MS. in 1812 was the key piece in the late George Turner’s ‘death’ collection.  It may be the earliest originating in the U.S. although European mourning envelopes wee used to America in the 1780s, for example one from Holland in 1782.  It is certainly one of the most distinctive of such covers.

One of the very earliest of the American mourning band covers is this example from Salisbury, N.Y. in 1818 with its hand-inked border.  It is addressed to Russia, N.Y.—one of three Herkimer county New York towns named for countries (post office in 1809).  The others are Norway (1813) and Poland (1829).  All are named for the Napoleonic battles as the Bonaparte family invested in American land grants in New York.

Almost four years after President Grant’s death, his widow was still using the medium wide mourning envelopes of the Victorian period.  Only the royal mourning covers normally use a wider mourning band.