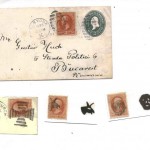 Our scheduled speaker in March was Matthew Kewriga, one of the new breed of younger serious collectors.   His topic was the 2¢ vermilion banknote issue.  Driving down to the meeting from Massachusetts, his car collapsed south of Stamford, CT.  However, not wishing to disappoint us, he has supplied photocopies of his approximately 100-page exhibit, selections of which are enclosed as leave-behind.  In addition to the essays and proofs shown in the leave-behind there was a large die proof.  Not included in the leave-behind were covers and cancelled 2¢ vermilions showing territorial use, forts, supplementary mail, held-for-postage and official uses.  Some 37 countries were represented in the foreign destination section.  Also there were forwarding agents including the U.S. Postal Agency at Shanghai, and on-board ship markings.  In expositions, both the Atlanta Cotton and Paris International Exposition were represented.  A notable feature was the concentration upon duplex killers and their meanings, patent cancels, etc.