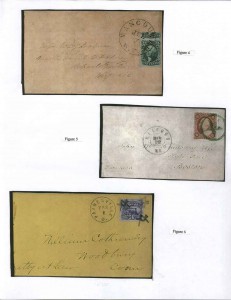 Figure 4: This item is seen in the Neinken Ten Cent book on page 161 where Mr. Neinken described it as a Type II and suggested the partial stamp is perhaps a quadrisect to pay the ship fee on a private letter ship letter brought to the Post Office by the Hudson Bay’s supply ship circa 1856-57. An apparent companion cover with the same type of franking was seen some years later in the Bilden stock, but was not purchased because it was a duplicate, a decision since regretted because of the research possibilities as to whether is was genuine. The problem with the illustrated cover is that the OU of Vancouver is carefully drawn in, along with the rim above, suggesting there were originally two ten cent stamps, with the envelope showing just touches of shadow in the area that would be involved. Consequently, was it a double letter from Vancouver or an even more desirable incoming ship letter overpaid?

Figure 5: This cover, from an 1971 sale, shows a bold green killer (similar to ST-S14 in the Eno book) tying a Three Cent Scott #26. It also has a March 22, 1861 double cds from Milford, MS. The problem with this cover is the killer’s ink, which seems to be out-of-period analine ink.

Figure 6: The Painesville, OH Masonic cover seems to be the reason for the listing of FR-M4b16 in the Eno book, where is is questioned based on this cover. Under UV you can see the outline of another stamp. Note too that the Masonic cancels are struck at awkward angles for a genuine strike.