In the meeting of April 10th, 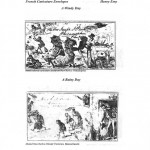 Mr. Grunin presented a spectacular showing of the Mulready covers and their caricatures as well as a series of propaganda covers used in England and the U.S. A..  a small selection of U.S. items is shown in the attached leave-behind.  It was commented upon that most of the printers of both the caricatures and propaganda covers were 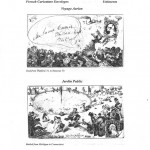 Scottish.  Did this represent a lingering resentment of Scotland’s incorporation into Great Britain or does it reflect the Scotch ingenuity at mechanical affairs such as printing?

First, there is a philatelic problem that Mr. Grunin posed to our group. It concerns the French caricature covers of which a number of examples are shown.  There are no examples that Mr. Grunin has been able to locate in French collections almost every example is found used in the United States.  Why? That is his question. 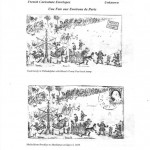 is the fairly scarce ‘Civilization of America’ for which he showed examples used in both England and America.  It seems to be a down-putting of ‘colonial’ civilization and a claim by England that American civilization is British derived.  Not shown is a second major propaganda topic, the Ocean Penny Postage covers, of which numerous examples are found on both sides of the Atlantic. The idea was a proposal by U.S. postal authority Pliny Miles, who joined in the demand to have a penny ocean postage similar to tha 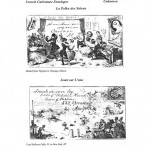