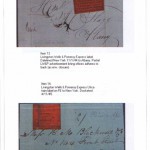 Our February speaker was T. Lee Pomeroy II, a distant relative of both George Pomeroy, founder of the Pomeroy independent mail and express companies, and his cousin, Henry Wells of Wells, Fargo.  This genealogical connection underscores a little-noted connection of present day descendants with their forefathers who helped move the mails over a century and a half ago.  I know of two members of the 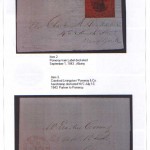 with Livingston, Wells, Pomeroy) who collect, while the late Pat Reed was a descendant of John Butterfield.  Mary Ann Owens is a relative of the Aspinwall family, well-known as mail forwarders.  Stanley Piller recently told me of a Hussey relative who has an interest in holdings of that local, while in writing about the “Intertwining of Philatelic and Social History”, I kept running across the same names over several generations (Multi-generational philately!) 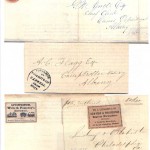 in the handstamps and adhesives 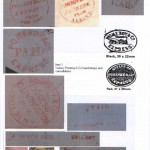 of the Pomeroy operations as well as the writers and recipients of the letters.  He is currently attempting a comprehensive census index that includes covers, writers, and recipients.