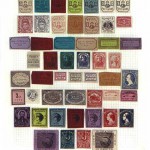 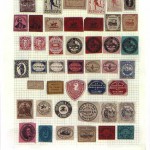 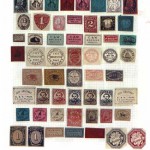 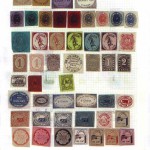 Our June guest speaker, Larry Lyons, discussed Locals and Carriers Fakes and Forgeries, the subject of his new three-volume work that won the Classics Society’s Chase Cup.  He began by showing the first Scott catalog that illustrated locals (1879) together with the Scott pamphlet of the same era, noting every illustration was a forgery.  Some four or more are still found in the l999 Specialized!  Attached are two pages from the Scott albums of about 1880 showing the Scott fakes.

The locals field has been plagued by fakes and forgeries since the beginning of organized philately (1861-1862).  Of the first four serious collector-students (George Hussey, born 1812); S. Allen Taylor, born 1838; J. A. Nutter, born 1849; and Charles Coster, born 1852) only the last was not a forger.  Also attached are some research sources; a letter from major student Elliott Perry on the Adams locals, a half-page of the Frank Levi Records of items illustrated in auctions, and a half-page of a major 1930s collector’s file of counterfeits (this may be Eugene Costales).

In introducing Mr. Lyons, I noted about 75-80% of all locals forgeries were generated by three men, to which Mr. Lyons appended the ‘reprints’ made from the Moens’ publication cuts.  The original 1862-4 illustrations of these were shown on pages 217-219 of Collectors Club Philatelist (CCP) of July 1993.  The second source, the ones from the Hussey/Woods ‘reprint’ printings of the 1860s are found in CCP November 1993 pages 360-363).  Two color pages from a notebook found in J. Walter Scott’s possession that apparently was the source for his 1879 forgery illustrations is attached courtesy of the Collectors Club of N. Y.  Six pages in color of the most prolific faker, S. Allen Taylor’s packet #34 are attached courtesy of the Philatelic Foundation, while two pages of the forms he used to print are also included courtesy of Sherwood Springer.

Mr. Lyons showed selected chapters from his work such as the City Despatch of Philadelphia, impossible Boyd items, and the Essex Letter Express (with a page of both genuine and fame examples from his holding.)   In sum it was an impressive and well-received meeting. 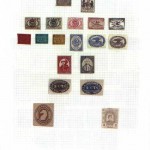 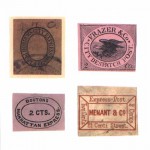 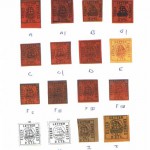