The May 14th presentation 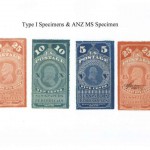 by Jim Kotanchik on the first newspaper issue of 1865 was well received by those attending and the speaker enjoyed the opportunity sufficiently to wish to return with a different topic in the future. Combining the information provided by Luff and Tiffany, these newspaper stamps were issued in mid-1865 and no longer were issued after February 1869. The stamps were used principally at Chicago and Milwaukee according to the May 1867 Stamp Collector’s Magazine. The purpose was to prepay postage on packages of newspapers forwarded by publishers or news dealers under the Act of March 3, 1863 whereby ‘route agents may receive and delivery, at the mail car or steamer, packages of newspapers and periodicals, delivered to them for that purpose by the publishers or any news agent in charge thereof, and not received from nor designed for delivery at a 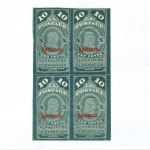 ny postoffice.’ This referred to bulk deliveries. Until 1865 the postage was paid in monies to the route agents to whom the packages were delivered and it proved unsatisfactory so stamps were developed as a solution.

The Act of March 3, 1863 provided in section 35 for newspaper rates from a known office of publication sent to regular subscribers as follows:

“Not exceeding 4 ounces and passing through the mails or postoffices of the U.S. the rate for each quarter shall be, for publications issued once a week 5 cents; twice a week, 10 cents, three times a week, 15 cents; six times a week, 30 cents; seven times a week 35 cents and in that proportion, adding one rate for each issue more frequent than one a week. For weight exceeding four ounces and not exceeding eight ounces, an additional rate, and an additional rate for each additional four ounces or fraction thereof; postage to be prepaid for not less than one quarter nor more than one year, at either the office of mailing or delivery, at the option of the subscriber.”

The U. S. Mail and Post Office Assistant in late 1866 shows that these rates still prevailed at that time so these were the rates applicable to newspapers covered by the newspaper stamps unless the Postmaster General authorized a special reduction. No such record has yet been found.

The newspaper stamps of 186 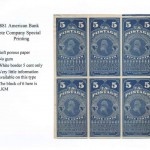 5 were designed to eliminate the attempts by some publishers to avoid this postage by delivering papers without going through the post but through the railroad or steamboat route agents. The total number of newspaper stamps printed show this was a relatively minor problem confined to a few geographic areas; otherwise the totals would be much higher.

For example in 1861 New York City alone handled more bags of newspapers than the total number of newspaper stamps issued from 1865 to 1869. A series of letters from postmasters published in the U.S. Mail and Post Office Assistant during 1865 and 1866 shows that for most offices the publishers prepaid delivery quarterly or annually and that no stamps were put on them. These letters confirm the restricted use of newspaper stamps to a few areas such as St. Louis.

While the 1878 Report of the Postmaster General indicated the stamps were first released April 1, 1865, neither Luff nor Tiffany found

quarterly data until the 3rd quarter of 1865. Tiffany notes the borders were changed in 1868 when the broad colored border was removed leaving only a fine colored line outside the colored frame. (These would be the ‘improved’ Continental plates described by Tiffany on page 213 of his History.) Using the analytic technique developed by William Herzog to reconcile the Luff statistics of manufacture and deliveries it can be seen there was a discrepancy of 30 stamps in each value in 1865 and 8,100 5¢, 60,100 10¢ and 5,100 25¢ stamps in 1866, with no discrepancies in 1867 or 1869 and only 6,100 25¢ stamps in 1868. This means we can split the two 5¢ printings, knowing that the second plain border total was 65,240 and any possible error is in the first printing total during 1866 so that the first Type 5¢ issued quantity is either 70320 or 78,450. The Tiffany data apparently missed several of the deliveries. The quantities issued are on the attached pages with the above modifications. 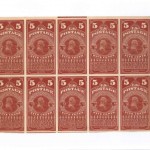 In addition to the 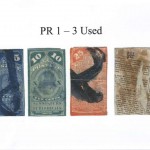 used examples cited and show by Mr. Kotanchik, attendee Carl Mainberger provided another example of a used newspaper stamp. The only indication that the stamps were actually put on packages or bundle wrappers is the one used example that shows part of a July newspaper on its back. It seems to be from a St. Louis newspaper based upon the geographic references contained.