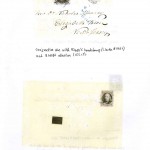 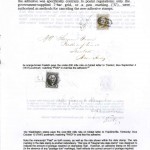 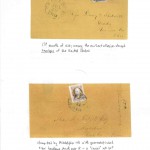 Harvey Mirsky led the February 10th seminar, showing unusual uses of the 1847 issue from Pennsylvania. The six pages attached below show some of the important material that was discussed at the seminar. The image on the left shows a first month use of the 10 cent stamp on an envelope. While envelopes go back quite far, they are rare prior to 1845 and comparatively rare prior to 1849. Also on this page is a very scarce use of a circular grid struck in the center of the Philaelphia CDS, both killing the adhesive. 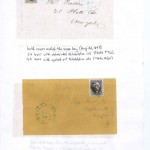 The image on the right shows that Philadelphia used two different CDS versions on the same day, presumably because two clerks were needed to cancel the heavy volume of mail that Thursday. The small blue ‘R’ seen on the left is scarcer than the large blue ‘R’ (introduced in 1845 and known until October 1849 and again in late June and July 1851), being know only for 20 months from about 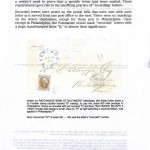 The next image, to the right, shows an early transatlantic sailing. It is the sixth possible date via a transatlantic steamer as no 1847s were yet available to catch the July 1, 1847 Cunard sailing from Boston and there wer 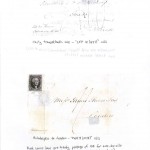 e but four other Cunarder sailings prior to this one, while the only non-Cunard sailing prior to this cover is on the Sarah Sands leaving New York August 4th. Of these, only two sailings bore covers from Philadelphia (one 5 cent pair and one ten cent single 1847), with a third Philadelphia cover going on this same Boston sailing.