Dr. Timothy O’Connor led our February seminar on the year 1775.  The focus was on one of the most critical periods in American history and the philatelic evidences.  Since 1768, British troops were quartered in Boston.  Following the Boston Massacre of 1770 and the ‘Tea Party’ of December 1773, all shipping into Boston was stopped on June 1,1774 and heavy restrictions were laid on Massachusetts citizens until open fighting broke out in the battles of Lexington and Concord after which the British were besieged in a hostile town by American troops in the suburban heights of Dorchester using cannon hauled from Fort Ticonderoga. Mail was expensive throughout the colonial period, so five covers were presented to show ‘outside the mails’ carriage.  Postal rates were 4 pence sterling for under 60 miles, 6 pence for 61-100 miles, 8 pence for 101-200 miles, 10 pence for 201-300 miles and 12 pence for 301-400 miles.  Common laborers earned 27 pence daily but prices were about five times as expensive so that a pair of shoes cost 44 pence (16¼ hours), bread was 13 pence per pound (½ hour labor), a bushel of dried peas or beans was 48 pence (17¾ hours) labor and it took 76 hours to earn a ton of coal.

Three currencies were in common use; sterling where 12 pence = one shilling with pence abbreviated ‘p’ or ‘d’, specie in pennyweights (dwt) or grains (gr.) and in Massachusetts Mass Tenor which was highly depreciated with ten pence in tenor =to one pence sterling.  Inter-conversions were one pence sterling = 8 grains specie or ten pence Tenor.  36 d = 1 dwt. = 2/6Tenor and one shilling = 4 dwt.  Attendees were given a primer course in interpreting colonial handwriting and currency conversions cover by cover as Dr. O’Connor took them through the year of 1775.  They also learned that mail was slow, with news of the battle of Lexington traveling express day and night averaging only four miles per hour.

New handstamps were introduced late in 1774 and an example was shown from New Haven that was receipt backstamped 1/6/75.  This cover was from the Friends of Liberty in New York.  The rate 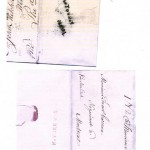 was 8d for a double weight letter under 60 miles to Wethersfield, CT.  A cover from Salem, MS. to Newport, RI in February was rated 2 dwt.  A pre-hostilities Newbury or Newburyport cover of February was rated 4 dwt 816 grains to Philadelphia, or in local Pennsylvania currency two shillings 2 d.  A February cover from Baltimore to Philadelphia was rated 2 dwt 26 gr., Beginning about March sterling was typical of the British post offices.  An occupation handstamp was used at Boston as seen on a triple rate (dwt) cover to Newport, R.I.  Two examples of the George*Town S (believed to be the town on the Delmarva peninsula) handstamp from the John Mitchell correspondence to Philadelphia were shown; both rated 2 dwt or one shilling in Philadelphia currency.  Two covers to Marblehead, MS, a safe British port, were shown.  One was sent on in April to Newport and was rated ship 2 dwt 16 grains or 8d sterling (6d (2 dwt) for 61-100 miles) plus 2d (16 grains) ship fee.  The second written from London arrived after hostilities and was rated 6d ship or 5 shilling Tenor; it has a Boston occupation backstamp.

New York handstamps show one of the widest variations during this period.  A red 27×4½ mm Type C handstamp was shown on an ex-Carson cover.  This marking is only recorded in black from 1773 through January 18, 1775.  A new 27 x 4½mm N YORK MR 7 was shown on a free franked letter by loyalist New York Postmaster Richard N. Colden.  (The marking is known as early as Feb. 2nd and runs to at least March 13th.)  A similar red N*YORK MY 2 was shown on a cover via New York to Montreal rated 1N2 (one shilling 2 d) but by June 5th, the same style as the Colden cover is 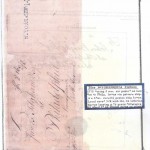 found used to Philadelphia rated 1N for the packet rate from England to new York and 1/10 in local Philadelphia currency.  Not shown was a franked manuscript E. Hazard, Constitutional P.M. cover used July 6th through July 12th.  A new turquoise blue style from he American post office is noted as early as August 5th (archival from the Gage intercepted letters0 while the earliest recorded in private hands is Mr. Hahn’s August 24th example.  Two examples were shown one of OC 9 nine days after Hazard is officially named New York postmaster and one of SEP:14 rated Ship 8:16 in pennyweights and grains or 3/8 in Pennsylvania local currency.  Mr. Hahn and Mr. Biales believe this to be to be the Constitutional postoffice five-week rate 20% reduction marking used August-September 1775 .  The local conversion leaves a 1 d or 7+ grains conversion sufficient for local carrier delivery.  Two New York packet covers show the rates to Scotland and into New York direct during the summer and fall of 1775.

Another cover, the Fredericksburg 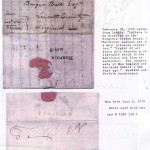 June 27th, may represent the Goddard 20% post proposed reduction, from N8 (eight pence sterling) to N6 (6 pence), however, alternative explanations for the rare are known.  Two covers were shown from the American post office located in Cambridge during the Boston siege.  One of October 18th is rated 4d and a Philadelphia receiving office 1/10 in local Pennsylvania currency.  The other originated at Newburyport November at Newburyport November 25th and carried out of the mils to Cambridge where it received similar marks on its way to Philadelphia.  Two examples were shown of the royal post at Norfolk, VA.; this city was destroyed by Americans in 1776.  One originated in Barbados and transited Norfolk on its way to Philadelphia.  It was a double packet cover (2/-) into Norfolk and may have gone from Norfolk to Philadelphia by ship at which point a 1/1 local currency was included covering carrier delivery as well to be then