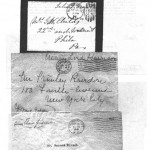 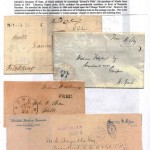 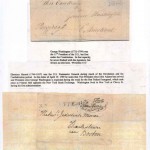 Our December speaker, Dr. Ronald Ollstein, presented a history of free franks from late medieval times to the present. In the English system, which we followed, Members of Parliament always seem to have had the frank, but the first written authority was 1652 and the earliest handstamped FREE strikes are from 1706. The earliest American frank was that of New York Governor Lovelace found on the first inter-colony letter establishing a post road to Connecticut in January 1673. While town name manuscript postmarks date to Boston in 1702/3 (there is a New York packet handstamp of 1710/1), the earliest American postmaster frank is that of Samuel Holbrook (6/14/1714-120/5/56) of Boston applied February 19, 1749. An encircled red hand-stamped ‘Free’ is known as early as 1706 from Ireland, while a standard marking was introduced in 1765; it is found on letters to America but did not carry the franking privilege over here as seen in the enclosed leave-behind, along with the earliest yet recorded British straightline FREE.

Dr. Ollstein presented franks by presidents up to the present as well as those of Signers of the Declaration of Independence and Members of the Continental Congress and Constitutional Convention. The presidents included Washington, Adams, Jefferson, Madison, Monroe, John Quincy Adams, Jackson, Van Buren, Tyler, Fillmore, Pierce, Buchanan, Lincoln, Johnson and Grant after which the penalty envelope was used. As noted in the leave-behind, Washington did not sign as President but used his title. An interesting pair is the Jefferson/Burr set as both had identical electoral votes and the election was swung by Alexander Hamilton (also shown), earning him the permanent enmity of Burr who fatally shot him several years later in a duel. The leave-behind includes a selection of franks of presidents and signers as well as widows. The shown items were much more extensive in all cases including ‘Lemonade Lucy’ among the widows. There is also a section devoted to the American Revolution. A major focus of the talk was the abuses of the franking system that led first to the ‘brown-out’ of 1845-47 and later to the introduction of official stamps and the penalty envelope. The items selected for the leave-behind merely illustrate the types of material shown by Dr. Ollstein, who presented many, many more franks than are seen in the leave-behind. 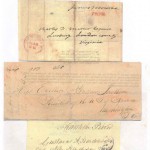 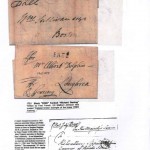 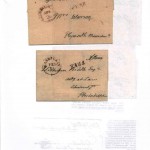