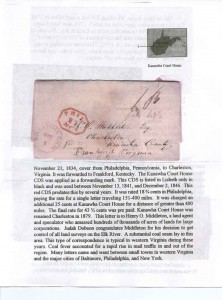 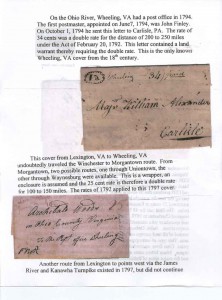 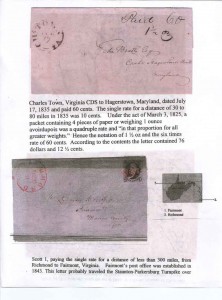 Dr. Norvil Rasmussen, who focused upon West Virginia pre-statehood postal history (pre June 30, 1863), led the March 12th seminar. At the dinner beforehand, much of the discussion focused upon the state of history teaching in our schools and colleges. A number of members commented upon their own student days and those of their children in this respect noting that stamp collectors have a much better sense of both history and geography than most because of their hobby.

To begin his presentation, Dr. Rasmussen showed a large map of mid-19th century Virginia and West Virginia upon which he used his pointer to pick out each of the postoffices when he 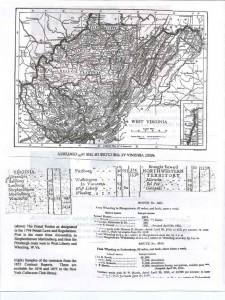 showed covers to or from them. He also passed out a large Richmond Enquirer EXTRA of October 10, 1826 that listed the proposed mail contract routes. As both are too large for the leave-behinds, I have substituted a later map and selections from the 1794 Postal Laws and Regulations setting out the first mail routes into West Virginia and several illustrative West Virginia contracts from the 1855 Contracts book as substitutes. According to the Eli Bowen Postal Guide of 1851, there were two major mail distribution centers located in what is now West Virginia-one at Wheeling and the other at Kanawha C.H. The 1851 mail routes from both are attached as well as a number of the other routes in what is now West Virginia. After explaining the map, Dr. Rasmussen then proceeded to show rare cover after rare cover ranging from the earliest recorded West Virginia use right on through into the Civil War period. 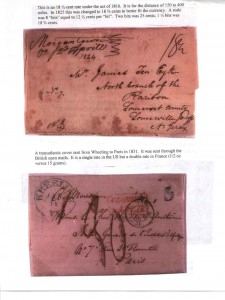 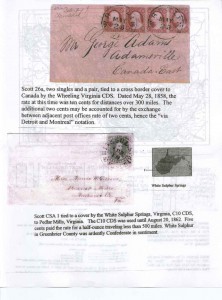