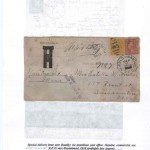 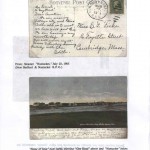 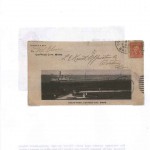 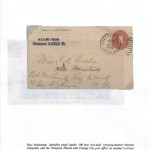 The October 10 seminar was devoted to the offshore islands of Massachusetts, with Douglas Clark serving as the seminar leader. Attendees received a 10-page reprint of his June 1983 American Philatelist article on “Nantucket Sound Steamboat Mail” including several additions. In addition to showing key items on slides, he filled ten frames with covers from the islands, particularly Woods Hole. The earliest was a privately-carried 1727 letter. Several early way covers of 1810 and 1812 were shown along with later ones, as well as “steamboat way” examples with a discussion of just what they represented; the discussion also included an analysis of contract and non-contract steamboat mail. Contract mail to Nantucket and Martha’s Vineyard began in 1817. Although “way” fees were discontinued in January 1853, the markings persisted well into the 1860s as a killer on U.S. mail. The scans below show every known handstamp ‘name of vessel’ marking used to the islands except for the unique River Queen (Lincoln’s presidential yacht), as that marking was not used during the period of island service by the vessel (1873-1880).

While a handstamp from the steamer Massachusetts is known (Hahn collection), it is not the Massachusetts which served on the Nantucket line, just as the handstampedTelegraph covers on the transatlantic run are for sailing packets and do not represent earlier uses of the Nantucket run steamer (1832-1862). Several covers ‘written on board’ the steamers were also shown. The presentation ended with the illustration of a perfined 1917 steamboat RPO cover sent for special delivery. Supplementing the talk, Cal Hahn showed a recent acquisition – an ‘On His Majesty’s Service’ cover from Edgartown from 1762 during the French and Indian War after the surrender of Canada but before the peace treaty of Ghent. It called for a meeting of the county’s militia, with officers to appear with their swords. 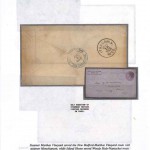 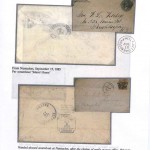 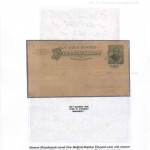 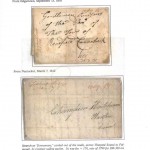