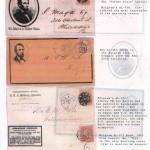 showed the Lincoln illustrated covers from his holding of interesting illustrated covers.  These were among the items used to illustrate the Abraham Lincoln Illustrated Envelopes book by Dr. James Milgram.  Of the 69 covers shown, four bore labels (2 beardless), 3 were embossed beardless, while 32 other beardless examples included six rail-splitter and seven combinations with Hamlin.  One was the fabulous clever alchemist design.  There were two type-only second campaigns, one of which was engraved as well as seventeen others including the very rare downward Lincoln comet design, four Magnus covers and five with Andrew Johnson’s portrait.  Mr. Jarrett showed nine mourning covers, two of which were only identifiable as such by date and one mourning example with the Albany Lincoln killer handstamp.  Most are pictured on the leave-behind attached. 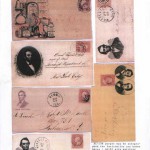 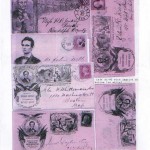 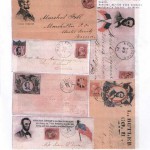 Mr. Jarrett’s well-known focus upon quality meant all examples were among the finest known and all showed the full 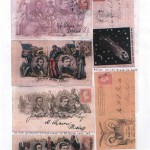 cover; photocopy cropping on the leave-behind makes some images to appear of a lesser quality than they were.  Too, the color cartridge registered more red than can be found on the originals.