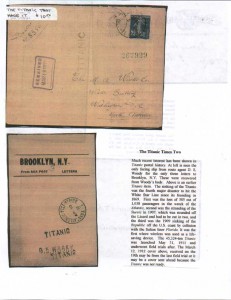 In the meeting of May 8th, Dan Seigle presented a series of surprises; he specifically chose a series of covers that he felt would appeal to various route agent members whom he expected might show up for the talk. He also included two covers which were shown in his previous seminar, but which were misinterpreted by me in writing up the results. The first is the unusual Jarrett & Palmer handstamp on the only rail trip upon which it was applied. This cover was a promotion for a theatrical company, Jarrett & Palmer, and represented a transcontinental rail trip of 84 hours coast to coast, a record that stood until Death Valley Scotty made a trip east in his Coyote Special circa 1915. T 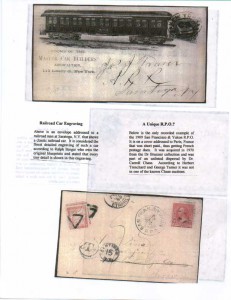 he second is the first day cover of the New York & Chicago ‘fast mail’ introduced by PMG Jewell to begin September 16, 1874 and which was discontinued nine months later on July 22, 1875. The text of the card, posted in Cleveland, showed how far and fast the train had traveled to that point by 1 PM.

Also shown were three covers from the Henry Gobie special delivery holding. From a rail point of view, the most interesting is the Detroit & Algonac RFD steamboat marking killing an E2. It is one of the finer examples of this railroad and steamboat rural free delivery marking. It is the only route agent marking that is a steamboat rural free delivery. Also shown is the ‘special delivery at any special delivery office’ stamp (Scott E1) of 1885. It on an illustrated cover of the Murray Hill hotel, the hotel of choice of the ‘nabobs’ of the robber barron era such as Diamond Jim Brady. Third is the scarce Worlds Fair Columbian Exposition duplex cancel on an E3. Also shown were a matched pair of covers with 1847s used from Ann Arbor, Mich.; the unique San Francisco & Yukon route agent marking; one of the routing slips recovered from the route agent’s body after the sinking of the Titanic; and an earlier March France to D.C. cover with the Titanic straightline that we now know is one of at least four prepared by collectors but sent on another ship earlier. Also shown were two puzzle covers; notes found in the Ezra Cole copy of the Knapp 1941 sale showing how this famous postal history collection came to market and who got what; as well as a very finely engraved illustrated cover (showing a railroad car that matched the blueprints in detail). 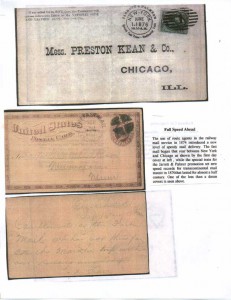