Express company philatelic artifacts comprise: a) bills of lading (which I do not collect, but which can be very helpful in determining agents, locations and rates), b) printed envelopes (of which I own a number, but mostly where they also have handstamps or labels, c) manuscript marked covers (found chiefly on covers of the smaller expresses or as auxiliary markings of the four major express company’s covers to show amounts, routing, etc.), d) handstamps (scarce on the U.S. Express Company covers) and e) adhesive labels.  Bags, boxes, wagons, etc. are usually considered too bulky to be philatelic artifacts.

With the current market prices as seen in the western express market, and individual auction realizations of eastern express items offered, it is clear that any fully comprehensive holding of all the express company philatelic artifacts would involve an investment of over a billion dollars.  No collector has ever been willing to invest even a small portion of this amount so that express company collecting is still such a very murky area as to what exists and how the companies operated. Yet, until a number of these artifacts are assembled it is difficult to comprehend in detail the manner in which the companies operated.

Express company operations are significant, for the companies were among the largest enterprises in America in the years just preceding the Civil War.  They are also a key link between colonial business practices, as modified by the largest enterprise in the post Revolutionary period, the Post Office Department, a discussion of which is found in my 10-part  “Post Office During Confederation” (Collectors Club Philatelist January 1991-July 1992). The express company business and financial practices were copied by other companies and set the pattern for the later industrial and financial amalgams of the late 19th century.  These, in turn, set the administrative and operational patterns for modern 20th and 21st century capitalism.  Unfortunately this critical link in the development of modern capitalism has been grossly unexplored and under appreciated.  One of the best business historians, Alfred Chandler, Jr. basically ignored the expresses in his studies of business institutions and practices.

Philatelic records of the U.S. Express operation in New Jersey, Pennsylvania and New York are much scarcer than those of its main Midwest base of operations.  Figure 5 is the only example from its New Jersey operations I have recorded.  The cover originated at Dover, a town on the southern edge of the New Jersey lake district, about ten miles north of Morristown, on the Delaware, Lackawanna & Western R.R. line.  The ‘Bill to Corning’ note probably refers 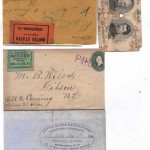 to Erastus Corning president of the New York Central railroad.

Figure 6 shows one of the scarce handstamps of the U. S. Express Co.  It is a black oval used at the company’s main operating office in Buffalo during 1855.  This office was run by superintendent Henry Kip and its location falls within the advertised office location of the American Express (numbers 13 through 19 on Seneca St.) showing how closely the two companies were tied together.   The contents were written by C. H. Henshaw, who reports he had Thanksgiving dinner with Henry Kip and that his salary is now $700 a year, which compares with the Hartford agent’s salary of $1,500 (probably Hartford, CT, not Hartford, N.Y.)

Figure 7 shows a selection of labels and covers.  First is a cover dated December 30, 1859 at Susquehanna Depot, PA that enclosed $20 and which bears a red label style #20.  This location is where the Delaware & Lackawanna R.R. enters New York.  Also seen are three other red Pennsylvania labels, two from Sharon, PA (Style 25½ and 26), a town where the Pennsylvania railroads enter Ohio (north of Pittsburgh), as well as a 25½ style from Athens, PA, where the Lehigh R.R. enters New York (south of Owego, NY).  To date I have not found a pattern behind the colors used for U.S. Express Co. labels, although the company generally favored green compared with the Adams Express yellow and American’s red.  I also have not identified the significance of the various printing number styles.

Figure 8 shows red 25½ labels from Salamanca, NY (where the Erie R.R. meets the Rochester & Pittsburgh rail line.)  It is the eastern terminus of the Atlantic & Great Western railroad (which ran to Dayton, Ohio by 1865 and which was leased by the Erie beginning in late 1868.)  Also seen in red is the 25½-style label of Buffalo, headquarters of the company’s operations, while a green (style #42) Buffalo label is also shown.  The red Lancaster (25½) is from the junction of the Erie and New York Central rail lines, just east of Buffalo.  The red 25½ Elmira label represents the junction point between the Erie and the Delaware & Lackawanna line.  Charles A. DeWitt was listed as the U.S. Express Company’s superintendent at this location.

Figure 9 is one of my New York favorites, a red 25 style label from New Paltz on a late 1870s cover carried locally on the Wallkill Valley R.R. to Goshen, N.Y.  The three cent adhesive did not pay postage, but was killed by a purple straightline ‘D. MARSH, Agt.’ Handstamp, presumably by the New Paltz agent in compliance with the government’s requirement that expresses must pay postage on letters whey carried privately by them. It is this point that Coster failed to recognize, although he did note the check claim nature of labels when they reached a junction between two rail systems.   Figure 10 is a C.O.D. label (style #45), from Buffalo with specific instructions on handling this type of letter or package signed by Henry Kip.

Figure 11 shows two examples, on cover, of the Money Package yellow route designation adhesives used by the U.S. Express Co.  The top one is a Wabash Valley Route with the messenger’s name in manuscript and is style #47.  The cover also gets a label from the Omaha office in Kansas Territory as the cover is addressed to W. H. Wells at Denver, Colorado J.T.  to show how it traveled west from Omaha.  This undated cover with its express charges of $1.25 can be assigned to the period between October 1859 and January 1861 because the former is the date of the establishment locally of Jefferson Territory and the later is the date of Kansas’ statehood.  I don’t record another item with the rare Jefferson Territory designation—no postmarks are recorded with that designation by David Jarrett in his 1976 Colorado Territorial and Pre-Territorial Postmarks  The second cover, with a similar yellow label is unusual in that the company’s name is in manuscript as is that of its messenger, but the label is an undated yellow generic style (unnumbered) of the U.S. Express Company’s Chicago & Rock Island Route on a cover addressed to Ottawa, Illinois.  The date is probably circa 1860.

Figure 12 is another unnumbered yellow Rock Island route cover addressed to Ana-wan, Illinois, while a New York and Erie unnumbered label from Winchester is seen both off cover (for detail) and on a cover, figure 13, where it is addressed to New Paris, Ohio that is noted as carrying $25.  One of my handstamp favorites is figure 14, a black strike of a railroad car illustrated handstamp from Atchison, Kansas addressed to Lampasas, Texas, a location southwest of Waco in the heart of that state.  A blue crayon  notes the cover was ‘Paid to Sedalia (Missouri)’, as well as a red pen payment of $20 and a pencil ‘paid’.  The content was a legal document.

A quick and dirty survey of labels and covers in my holding shows some 19 Ohio, 11 Indiana, 5 Illinois, 4 Kansas and 21 Iowa towns were represented, each with one to three different labels.  This does not include some eighteen years of cover sightings posted in my auction catalogs and not yet transferred to my U. S. Express Company file listings.  Nevertheless it does give some idea of the distribution pattern of the company’s operations.  Stimson tells us some information about the number of offices in the mid-1870s.  He reported about 300 offices in the old Northwest Territory, of which 100 were in Michigan; he also noted the company was strong in Pennsylvania and Ohio.  There were 100 offices in Missouri in 1879, while only the U.S. Express Company and American Express Company had offices in Wisconsin, possibly 150 each.  There were 300 U.S. Express offices in Iowa, while Nebraska was divided between American and U.S. Express Co. offices.  Minnesota offices were limited, for the Northern Pacific had its own express company there.  American and the U.s. Express Co. shared offices along the Chicago, Alton & St. Louis R.R. system.

Contracts with the railroads were a critical competitive weapon in the 1870s and 1880s.  There was some attempt at exclusivity, but in the Westcott vs. L.I.R.R. case this was challenged and it was held that a railroad could not stop an express from operating over its lines.  The Adams Express Co. was a major competitor for the U.S. Express Company.  It had negotiated an exclusive contract with the Pennsylvania R.R. and used that contract to drive the U.S. Express Co. out of that state.  Similarly in November 1871, Adams signed up the Kansas and Topeka line from Sedalia to Fort Scott and a month later signed up Missouri contracts to eliminate Wells Fargo as well as the U.S. Express Co. in those states.

The market currently seems to find that conjunctive uses and double labels are scarcer than I find them.  Probably what has happened is that one label of the labels has been soaked off in a number of cases.  Figure 15shows a conjunctive use with the Merchant’s Union Express.  This express company was an upstart that lasted from 1866 to 1868 with heavy financial backing and a wide distribution system.  It was bought out by the American Express Company, which renamed itself American Merchant’s Union for the next four to six years before resuming the American only name.  This cover traveled in a style #52 envelope from Summit, Iowa bearing a green style #44 label.  It was then turned over, in Chicago, to the Merchant’s Union Express to go on to Rockford, Ill.  Figure 16 shows a companion late Merchant’s Union style #87 envelope from Rockford, Ill. to Farmington, Iowa that bears an unusual pink ‘cut out’ instruction that when the cover is returned it is to be billed to M. A. Pinney, the Ottumwa, Iowa agent.  It is dated July 21, 1868.

A triple conjunctive use of March 1869 is seen as figure 17.  It is a collection attempt to gain $49,55 for a Philadelphia firm.  It used a Howard Express Philadelphia envelope, which carried it to Dunkirk, N.Y. where it was taken over by the U.S. Express Co. to carry it to Erie, PA for collection by the American Express Co. there.  Another triple label cover is seen as figure 18.  This 1861 cover contained $50; it originated at Wintersett, Iowa on the Rock Island R.R. whence it traveled to Marengo, the junction point with the Chicago & Milwaukee R. R.to go on to Chicago for retransfer to the American Express Co. for final delivery at Rockford, Ill.  Not illustrated for lack of room is the rare negative black handstamp used at Marengo, Iowa in June 1866.