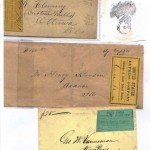 In 1881, the New York City office of the U.S. Express Company had a stable just back of Trinity Church (on Wall Street in the landfill section).  Edwin Pultz headed the stable.  He had served since about the date of the company’s founding (probably as stable master.)    However, the chief freight office in the east was in Jersey City, next to the Erie rail depot; there A. Thayer was in charge.  The combined freight operations of these two offices included 130 horses, 33 double wagons, 29 single wagons, 100 drivers and helpers and 25 stable hands.

Around 1870, Charles DeWitt replaced the company’s first president, D. N. Barney.  De Witt also operated out of New York rather than Buffalo.  In turn, Thomas C. Platt (7/15/1833-3/6/1912), figure 4, replaced DeWitt.  Platt had earlier become the company secretary in 1879 and was named president the following year.  He was an investor in mid-west timberlands as well as past president of the Tioga County Bank.  He served in the House of Representatives from 1873 to 1877 and then was briefly in the Senate during Garfield’s administration, resigning along with Senator Conkling in May 1881 in a major dispute with President Garfield.  He was then ‘out of politics’ for some years but by 1890 he was the Republican boss of New York and a close friend of Assistant Postmaster General Clarkson.  Platt was back in the U. S. Senate between 1897 and 1909, dying in 1912.

It was Platt who nominated Theodore Roosevelt for Vice President, as a means of getting Roosevelt out of New York politics.  Figure 4 shows Platt.  His predecessor, as president was Charles DeWitt, who had been a route agent between 1855 and 1858 on the Buffalo, Corning and New York railroad and on the Buffalo and New York rail line.  From a large white express label, we know he was the superintendent of the U.S. Express Company at Elmira, N.Y. sometime prior to his presidency.  In 1882, Platt was the company president, Kip was vice president and Seymour DeWitt was superintendent.