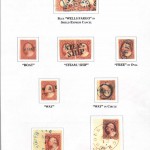 Our January speaker was fellow club member Wade Saadi, who gave a fascinating presentation on fancy cancels on the 1851-68 issues. Wade’s talk, which focused on the 1851 imperforate and 1857 perforated issues, drew a large number of member 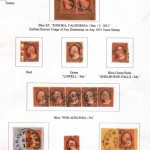 s and guests. He showed a very wide range of cancels, running from simple town markings to fancy cancels such as the running stag. Some of the examples shown were likely the finest known copies. Those who attended Wade’s talk were rewarded with color copies of selected pages.