Brady had to deal with the burgeoning California and Caribbean mails as well as the rate complications resulting from the new European mail treaties.  The government also moved to end all city private locals during Brady’s administration by making city streets post roads.  When Franklin Pierce’s Democrats came to power following the 1852 election, Isaac V. Fowler replaced Brady on May 1, 1853.

Fowler was a Tammany man and his term of office coincided with Tammany Hall’s new reliance upon gangs of Irish emigrants who came over following the potato famine.  Fowler was removed from office in May 1860 with charges of ‘mismanagement’ and ‘recklessness’.  His replacement was General John A. Dix, a former New York senator and candidate for governor.  Although unfamiliar with postal operations, Dix quickly restored public confidence in the New York postoffice.  President Buchanan selected him as a ‘lame-duck’ Secretary of the Treasury so that he needed to be replaced by February 8, 1861.  His successor was a long-term postal employee, William B. Taylor, who continued to serve under the new Lincoln Republican administration.  Taylor’s replacement as assistant New York postmaster was Seymour Strong, who took office in March 1861.  Lincoln finally replaced Taylor April 1, 1862 by Abram Wakefield.  Taylor became Wakefield’s assistant postmaster.

The statistics for the year ending September 30, 1861 can be compared with those of the Coddington era to show the change in the department during the critical decades.  They reflect the tremendous growth of the city.  There were 14,142,021 letters mailed in New York with an additional 12,750,155 letter received from other locales for re-mailing.  This latter figure excludes the 403,137 letters to be sent to California.  First class letters for delivery within the city totaled 15,5 million.  Additionally there were 1,570,000 drop letters and 3,207,737 circulars.  The foreign mails handled totaled 4,918,937 letters.  In printed matter such as newspapers, New York was handling about 724,000 bags of mail letter, about evenly divided between bags received and bags sent.  About 146,433 domestic registered letters were handled while the carrier department delivered a total of 6,721,346 letters.

To handle this volume of mail, New York employed 355 postal employees including 117 carriers of whom 38 were devoted solely to collecting the local mails from the 574 cast-iron letterboxes attached to lamp posts around the city.  There were six branch post offices, with a seventh established on Broadway at what is now Herald Square in April 1861.  In addition to the carriers there were 238 postal clerks, mostly in the main office but a handful were in each branch.  Another expansion of the Old Dutch Church was proposed in early 1862.

Postage stamps were still being handled in a restricted fashion.  The stamp section was split in two in which one involved transactions of a dollar or upward, while the other involved purchases as low as a single one-cent stamp.  The first was still located at the head of the stairs leading to the entrance to the offices of the postmaster, secretary and cashier where a clerk presided over a counter in an enclosed space made by partitions and dispensed sheets and part-sheets.  His office was open from 9 to 3 and did about $2,800 daily.  On ‘steamer days’ the new prepayment rules meant he was busy dispensing high value stamps.  The ‘lower stamp window’ was located next to the general delivery window and only dispensed stamps in quantities of $1 or less.

Latest of the New York orange c.d.s. examples used for only three months in 1844.

One of less than a handful of the branch p. o. 2¢ rates.  Dated printed form of November 5, 1842 for the Snug Harbor sailor’s home.  This branch was the new Merchant’s Exchange.

Albany 1842 legal notice put into the ‘upper p. o.’ for box delivery but not for transmission.  This is to a box in the Rotunda. 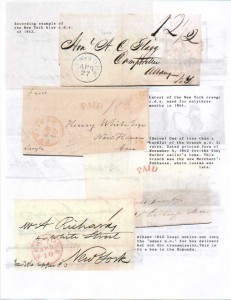 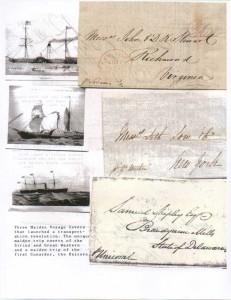 The famous Father Knickerbocker cover, ex-Haas and Grunin—one of the two recorded—used on Long Island Sound by error.

The red New York/Paid 3 Cts used together with the rare black strike of the same.