There are apparently plating differences in the adhesives printed and possibly two printings: While there are no multiples so plate position cannot be determined there are several apparent position pieces-an apparent top left margin example (A) (census # 7), one that seems to be the upper right corner (B) (census #1 and 7), a lower left corner copy (I) (census #4, #5, left stamp), a lower right corner item (J) (census #4) as well as several that seem to be either left or right margin examples. I have identified ten varieties.

These are: A) A probable upper left corner position (#1) is seen on the LaTourette cover, census #7. It has a large upper left corner break, but otherwise the outer frameline is complete. The Philatelic Foundation photograph indicates a complete inner frameline. There may be an extension of the left frameline at bottom. This extension is also seen on census #16, which is also probably also position #1.

B) This is an upper right corner, position #2, This is may be seen on the Johnston cover, census #1 (Golden lot 474),
which also shows a thinning of the heavy outer line at lower left, but a complete inner line except at top, where the inner line is missing. This position is also seen on lot 83l in the Kaufmann #58 5/13/89 sale.

C) The White cover, (census #6, lot 1577 in the Schwartz sale) shows outer frame damage at upper right otherwise only seen on the larger right Packard (census #5) example. This stamp shows the inner portion of the upper left break but not on the outer edge. It almost does not show the bottom mid-point break. Both it and the White cover stamp have a small mid-point bottom frameline break and a medium large break at the upper left and a minimum break at the lower left corner. It seems to be a right margin example, e.g. from positions 4, 6, or 8. Census #13 shows the outer frame damage at upper right, the minimal mid bottom frame break, but a larger upper left corner break and a somewhat larger bottom left corner break suggesting a later pull from the same position.

D) The Mitchell cover of May 12 (census #8) has two inner line breaks at top and a missing inner line at lower left, (Stimmell’s Penny Post article on Blizzard Mail illustrates this). There is an upper left break, but none at the other corners. The left frameline appears somewhat damaged opposite the ‘D’ of DISPATCH.

F) The Hall Craft cover (lot 418, census #9) shows almost complete inner framelines and very narrow breaks in the outer frames, suggesting it came from an early printing as does the Hall sale lot 419 Levick cover (census 27). Census #22 (Lowe lot 1596 in the 3/1/73 Basle sale) also seems to show these characteristics, but with a larger upper left corner break. All these appear to be left margin stamps, e.g. from positions 3, 5, or 7.

(G) The Hyde cover (census #33 lot 1574 in Schwartz sale) with the two adhesives has an almost complete inner lines all the way around although they are beginning to break up. There are thin outer line breaks at upper left, upper right and lower left. The Adams cover (census #36) shows similar characteristics, but the inner framelines are more broken.

H) The illustrated Independent Philatelist cover adhesive shows no break at either upper left or bottom midpoint. There is a thin lower left break and the lower portion of the left inner-line is missing. (See Stimmell’s Blizzard Mail article in Penny Post.)

I) A bottom left corner position (position 9, Schwartz lot 1575) is seen on the left of the two stamps on the Packard cover (census #5). This left stamp is smaller than the right. It has a clear thin break at the upper left but almost no bottom mid-point break. It is characteristically weak at lower left. The stamp also has a medium large upper right break. The rule under Dispatch appears doubled at the right. The Wood cover (census # 4, Schwartz lot 1578) shows traces of another stamp at left and seems to be a bottom sheet margin example, position 9. It has only a thin break at upper left and a medium large upper right break. It appears to have a small bottom break, but does have a characteristic lower left bottom corner break. There does not appear to be any doubling of the rule under ‘Dispatch’.

(J) The heavily inked Craft cover, census #35, is the closest we have to a bottom right corner margin example (position 10, lot 1597 in Robson Lower sale of March 1, 1973). There is a thin break at the lower left corner and only a nick at the bottom mid-point. There is no upper right break. The top border may be somewhat thin towards the left; any upper left break is not visible due to the cancellation. This Craft grid killer adhesive cover has a blot between the lower inner and outer lines. Another example of this position is census #3, the earlier Mitchell cover which shows the thin lower left break and a wide break at upper left (obscured by the killer on the Craft cover). It also shows another characteristic, a nick on the underside of the top frameline over the ‘C’ of City. 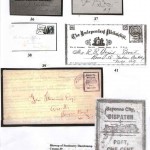 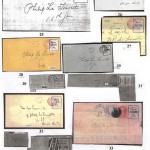 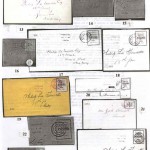 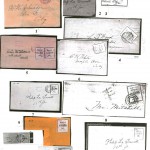