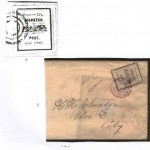 The January seminar by Calvet M. Hahn was meant to show what could be done in philatelic research by the use of auction catalogs, using the philatelic local of the Bayonne Despatch as an example. In putting together the list of sales, it turned out that #10, from the Paige Blake sale had a much better photo than the Levi records photo used in the leave-behind and it showed this was a Philip LaTourette cover, also the following lot (56) was a VF example of the unused stationery, reported in the Eno sale, which may be where Blake obtained it or it may be a second unused example.

The text used the basic information from contemporary philatelic journals supplemented by general information about Bayonne. Once it was suggested that there were 10 positions, but no multiples, the four corner pieces were identified and possible left and right side position pieces suggested so that illustrations of each position on the plate could be shown. The doubling of the center suggests that it was a loose woodcut or rubber stamp (there was less wear than on the borders), which wiggled so that there are ‘double transfers’ of the center. The photos were not sufficiently clear to show if there were ten different centers inserted, or electroplated copies of one.

***(Note: Cover scans are found after the article)

This local was in existence for approximately three months in the spring of 1883, when the intercity postal rate was 3¢. Its main office was in the A. J. Theobald Hardware Store, 16th St. and Avenue D in Bayonne City (located between Broadway and Avenue E on modern road maps) with Roswald Edward Smith as its manager. Chartered as a city in 1869, Bayonne is located on a peninsula between Newark Bay and New York Bay and is the third largest manufacturing city in New Jersey being the petroleum distribution center for the newly formed Standard Oil Company. It still had the villages of Bayonne, Bergen Point, Centerville (Van Buskirk or Constable Hook) and Pamrapo (Saltersville) within its geographic limits in 1883. Each of these villages had its own postoffice.

A group of three young stamp aficionados who had been schoolmates in Bayonne backed the operation. Each later became a stamp dealer. They included dentist Dr. E. H. Mitchell and 19-year old Harry Craft (publisher and editor respectively of the Bayonne Philatelist in 1883-4 and the Independent Philatelist 1884-1891) and Philip LaTourette a stamp dealer, whose family operated the LaTourette hotel in Bergen Point who authored a number of articles in the Philatelist. William P. Brown, a major early stamp dealer located in 1883-4 at 25 Ann Street where he did print work for Dr. Mitchell and the Independent Philatelist and by February 1885 at 2-4 Stone Street in New York, apparently advised the group and suggested that adhesives be issued.

As an article in #4 of the Bayonne Philatelist by ‘F.M.B.’ noted, in late 1882 or early 1883 a number of new locals began including Allen’s Dispatch, the St. Louis and Cincinnati City Delivery, and the Ledger Dispatch of Brooklyn. While not mentioned, the Bayonne City Dispatch was another. In issue #2, LaTourette advertised from New York that he had Ledger Despatch stamps for sale.

Dr. Mitchell in the March 1887 issue of the Independent Philatelist noted that the post’s adhesives were introduced April 15, 1883, upon the advice of a New York businessman (probably stamp dealer William P. Brown) as reported in the Bayonne Evening Journal of June 12, 1883 and stamped envelopes introduced in May 1883. It ceased operation by July 1, 1883 due to the government’s attack on delivery companies. He cited his source as R. B. Maxwell of the Bayonne City Press Association, who published the data in the Bayonne Times of August 5, 1886. Mr. Maxwell’s information was that the post was formed April 1, 1883, with a rate card of one, two, and three cents and letters at eighty cents per 100, with twenty messengers available each hour.

As a census of surviving covers indicates, the Bayonne City Dispatch was basically a philatelic local, although LaTourette may have seen some advantage in handling mails from his family’s hotel. No covers are recorded prior to May 9th the date the first philatelically inspired covers are recorded, while purely local deliveries basically ceased ten days later.

The post operated in the Bergen Point area primarily south of 20th street, where the LaTourette Hotel, Dr. Mitchell’s office (opposite the railroad depot), and the Bayonne Philatelist (27 W. 8th St.) were located. According to the 1883 Poor’s Manual of Railroads map, this depot is where the Central Railroad of New Jersey (formed February 22, 1849) crossed from Elizabethport to Bayonne on the way to the Jersey City terminal where ferries went to New York as of 1864. The rate in that area was 1¢, with a 2¢ rate from 20th to 30th Street and 3¢ elsewhere. Only covers with the one and two cent rates are known, and only one of the latter, census #5. Beginning May 19th, most covers are to-the-mails and carry U.S. adhesives.

The superintendent of the local was Roswell Edward Smith and there were telephone connections with the New York and New Jersey Telephone Company as well as collection boxes in three hotels and four rail depots as well as in the Bayonne City Hall. Messengers had numbered ‘special messenger’ badges for identification. For express material, the local used the Sweeny’s Bayonne City Express and the Seaman’s Bayonne City Central Express Co. Subsequent interviews with one of the company’s carriers indicated it was a highly profitable operation and that packages were charged 25¢ each (a typical express company charge of two bits).

Both adhesives and stationery were issued. The Bayonne Journal article reports that adhesives with the team of horses pulling a stagecoach were typeset and printed in sheets of ten, imperforate, 22½ by 28½ mm. While the overall stamp was typeset, the center cut seems to have been a woodcut that was loosely inserted creating double transfers. John Bowman reported the stamps are irregular in size being 22 x 28 mm along the top and right sides and 22.5 x 28.5 mm along the bottom and left. He was also the first to report that double transfers were known, although Robert Kaufmann had illustrated one in his June 1989 Postal History Journal article.