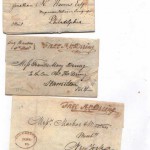 The earliest reported Sag Harbor cover appears to be one seen here dated February 19, 1798 from Mary Havens at Shelter Island to her brother Jonathan Havens, a congressman in Philadelphia.  Haven was a state assemblyman (1786-1795) and a New York delegate to ratify the Constitution.  The cover would have been posted in the 1789 Old Custom’s House, shown on a modern postcard.  This building was also the first postoffice and the office of the first postmaster and customs collector Henry Dering for almost three decades.

Prior to the Revolution, Sag was second only to New York as a trading port, with a concentration on West Indies trade.  It was the last town occupied by the British and had the first Long Island printing press, publishing the Oration on Rights of Animals in 1791.  Sag was also the homeport for Joshua Penny’s first submarine in 1813.  Early letters were lost when the town burned in 1817; it was fully rebuilt by 1820 and had 21 whalers by 1836 and over 40 by 1843.  An example from prior to this fire was franked by H. P. Dering, the long-serving first postmaster as well as Long Island’s first customs collector, appointed by George Washington.  It is addressed to Hamilton, N.Y.. October 6, 1815 during what would be the war rate period.   James Fenimore Cooper’s ‘Natty Bumpo’ character was a Sag man, modeled on Captain Hand.  In the gold rush some 250 men left Sag alone.  A second major fire that burned 57 shops in 1845 reduced the town to the small south fork village it is today.

An irregular purple-red circle handstamp with the town name underscored was introduced by February 21, 1813, as the example shows.  A June 14, 1813 example, written on the 12th, with a small FREE to Col. Wadsworth in Washington, D.C. reported that the British fleet was offshore, with troops landed on Gardiner’s Island and urged providing means for defense. .  This underscored circle marking was still being used on July 11, 1814 as a letter carried privately from Shelter Island to Sag and posted there by a Dering relative to his sister Mrs. L’Hommedieu at Middletown, Ct. shows.  The letter reports some family members are moving to Ulysses at the southern end of Lake Cayuga and will have to travel in wagons.

A new style 27mm circle was introduced by 1814 in a red-brown shade as seen by a Dering letter to his daughter at New London posted November 7, 1814 on a pink paper.  Dering noted the enemy ships were at the same stations but not as numerous as earlier such as in his 1813 letter.  By April 1815 it is found in a brown-black shade as seen by a free franked Dering letter to his daughter at Groton, Conn. posted April 24, 1815.  This letter notes that the New London boat was delayed a week because of weather so this is going by mail.  He also reported he is going on an election tour of the town of Westhampton.  There was a red 30 x 24 mm straightline briefly introduced in 181l but quickly abandoned when the underscored oval was introduced.  The new circle style maintained the large PAID of 1808, as seen on a legal document letter postmarked February 4, 1821 addressed to Moriches, Brook Haven, and substituted a large FREE with a period after it for the smaller one found in 1813.  This larger FREE can be seen on a December 30, 1816 cover to Moriches, L.I.

Three letters show Dering’s handling of ship letters at Sag Harbor.  First is one of March 3, 1817 written at Havana, Cuba on January 17th that was brought in by a Capt. Swim and is addressed to New York.  Dering did not mark it ship and rated it with a red ink 12½ and sent it on to be received on the 5th.  A small SHIP handstamp was applied April 24, 1820 to a cover from the Brown & Ives correspondence addressed to that firm at Providence, R.I.  This letter gives an idea of the Brazilian trade of the period.  It originated at Bahia, Brazil February 20, 1820 by Samuel Young 2nd captain of the Brig Hector who reported speaking to the Asia in late December and that that vessel was bound for Amsterdam.  The Hector sailed for Rio de Janeiro the day this letter was written giving prices current on coffee and tobacco with a cargo of fish and then take a cargo of tobacco to Gibraltar.  It had been delayed because the customs officials would not inspect on Holy Days. .  A second SHIP handstamp was applied on a letter from Gardiner’s Bay on Gardiner’s Island to New York on February 22, 1817 addressed to Lynch & Aymar in New York stating arrived two days earlier and hopes to get to New York on Saturday.  The cover was rated 14½ to cover the 12½¢ rate to New York and the 2¢ ship fee on an in-ship letter from Gardiner’s Island so it is a Long Island Sound handstamp SHIP use.

Dering was a careful postmaster and the strikes he applied to letters are good.  His successor, Samuel Phillips, who served from around 1822 until June 1, 1841 was not and his strikes are usually poor.   A poor strike is recorded July 7, 1821, which seems to show that the change occurred after the excellent strike of February 4, 1821 and before this.  Phillips used a red 28mm circle initially, but on January 12, 1830 this is found struck in orange on a letter from a local committee to solicit Congress to appropriate funds for a breakwater in the harbor at Sag.  By early 1831 the strikes are found in black and that color continues to be used until 1836.

One of the more interesting of the black strikes is on a whaler cover written by a man who took over from an ailing captain and set a letter back to Capt. Allyn at New London, one of the vessel’s owners from St. Helena where forwarder L. Gidron sent it to the Cape of Good Hope where the Cape firm of Thomson Watson & Co. sent it to Sag Harbor where it arrived and got one of the new black c.d.s. markings of January 30, 1831. The new captain stated he was going to the Falklands and the Maine banks for more oil; he also noted he had purchased the ailing captain’s instruments. A good black strike is known used on an April 27, 1831 cover while a poorly struck one is found December 19, 1836 on a letter discussing the sale of the Abraham Bell immigrant line’s 397-ton Josephine and when that vessel was last copper-bottomed.  This vessel had made one of the fastest Atlantic passages in 1831, being 15 days 12 hours.  Samuel Phillips reverted to red markings sometime in 1838 until 1840, as very poor examples are known October 8, 1838, January 9, 1839 and March 25, 1840.

John Sherry succeeded Phillips on June 6, 1841 and served until sometime after September 1843.  Sherry shifted to blue postmarks using the same worn-out 28mm handstamp which are known on two carrier delivered covers from the Nicholl’s correspondence one to Albany with a PAID dated June 3, 1842 that discusses mother’s hypochondria and a second of March 14, 1842 that was datelined March 9th on Shelter Island and gives Shelter Island family news. A third blue strike is known January 27, 1843. Peletiah Fordham took over as Sherry’s replacement and served until December 31, 1844. He was replaced, in turn by E. L. H. Gardiner January 1, 1845.

Gardiner initially kept the blue handstamps as seen by a New Year’s Day example of 1845 that gives the quarterly report for Baptist activity and reports that the number of Baptists rose from 28 to 100 during the past year.  He reintroduced red strikes in February  as seen on an example of February 28, 1845, ex-Smith, to the Surveyor General at Albany.  Other 1845 examples in my record are of February 5th and December 25th. A new postmark is introduced during the summer of 1845.  It is a 30mm marking with the state name at the bottom.  An example with an X handstamp crossing out a 5 rate to Albany of August 30, 1845 can be seen while a 10 rate is seen on an August 12, 1845 cover to Norfolk, VA.

A brief postal interregnum takes place between June 9, 1847 and May 7, 1849 during which N. W. Tiffany is postmaster and reintroduces the new  handstamp in red. An example with an encircled X rate posted July 8, 1848 is seen that is addressed to the Fall River Iron Works while a letter from Pernambuco, Brazil via Fayal in the Azores addressed by Albert Knox Jr. to his father is sent via  the whaler William Tate, which is ‘just shoving off’  It reached Sag on June 22nd and was hit with a red SHIP and rated 12 (10¢ to Charlestown, MS and 2¢ in-ship).  When Gardiner resumes the postmastership from May 8, 1849 until May 18,1853 he keeps red as the postmarking ink until the rate change of July 1, 1851.  Both men used an encircled red 5 rate known from July 8, 1848 to June 2, 1849.  The red c.d.s. is found on a May 10, 1851 letter from Daniel Dayton with a manuscript ‘Drop 2’ rate addressed to Samuel Gardiner at Sag Harbor.

Gardiner uses black ink beginning in July 1851 and he and his successor, Thomas E. Crowell continue the practice.  Crowell serves from 5/18/1853 until June 1, 1861 at which point P.J. Jenings is appointed and serves into 1869.

After July 1, 1853 the circled 5 is found in black as an unpaid rate with an example shown of December 13; another is recorded April 16, 1853. A similar encircled 3 with a black PAID, formerly in the Hutchinson holding is seen on an August 9th cover to Brandon, VT, while several examples of just the PAID are found on letters to Sag Harbor, one of which is dated February 10th, having originated at nearby Canuplace February 9, 1852 while a second is addressed to Cutchogue.  By January 27, 1853 a plain ‘3’ handstamp is substituted along with a PAID as seen on a carrier delivered lady’s embossed cover to Miss Camerden at 86 Ludlow St. in New York.  The contents discuss sleighing, local temperance meetings and the fact that some 400-500 people were at church over the holidays.  An example of this 30 mm c.d.s. used with a FREE for Post Office Business is postmarked April 20, (1852). It reports to the publisher of the Home Missionary paper that  the newspaper is taken out of the office by P. Fordham to whom it was addressed. . A drop letter from the Gardiner correspondence of 2/10/(52) that originated at nearby Canuplace is seen; it bears only a PAID.  Another example from the Gardiner find is postmarked JUL/19 and bears a manuscript pencil ‘Drop 1 CT’. 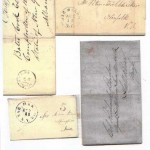 A new black c.d.s. of 32mm is introduced sometime after April 1853 and before December 1854.  It is seen with an unpaid ‘5’ handstamped cover postmarked December 11 (1854) to Springfield, MS and on an arc PAID/3 example of December 3 addressed to Hartford, CT. that is recorded in 1854.  Several drop letters are known with this c.d.s.  An unusual item from the Gardiner find has a DROP and PAID with a slug imposed over the DROP. Undated it is postmarked August 11th.  A clear example with a DROP/1 is postmarked November 23rd;several examples of this are known.  Finally an example postmarked April 10, 1857 from the Nicholl find.  It was carried into Sag by Mary Sherry and is struck with what looks like a DROP/4 but may be the DROP/1 with a slug over the rate.

As befits a major seaport town, the final item shown is a January 4, 1857 item with a PAID (24 in manuscript) addressed to Daniel Huntington Artist, c/o 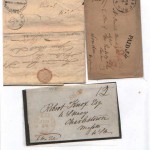 Geo. Peabody, Bankers, in London. It was sent via the CunarderPersia leaving New York 1/6/58 and arriving  on the 16th. It bears a London receipt of the 16th and the red ‘19’ exchange marking.  Huntington (1816-1906) studied with Samuel Morse and was a member of the Hudson River school; he painted the Lincoln portrait seen in the Union League Club today and the James Lenox portrait found in the New York Public Library at 42nd Street.