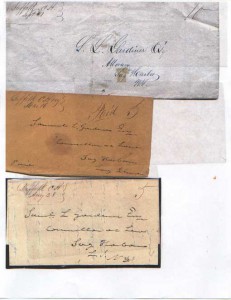 From the beginning until the 1830s, Suffolk Court House used only manuscript postmarks.  They are recorded from 1817 to 1849. Shown are examples including one with a free frank by the postmaster.  There are unpaid 5 (8/28/1847) and 10¢ (double weight 9/21/1846) rated covers as well as a paid 5¢ example on a multi-forwarded rerated example posted at New York March 11th to Riverhead and reposted there to Sag Harbor.  The free frank is an order for the School Journal of July 3, 1843 franked by Geo. Halsey–the Suffolk C .H. postmaster at that time.  A way cover originating at Cutchogue February 18, 1832 was posted at Suffolk C.H. February 23rd by Daniel Downs to his children and addressed to Rev. Sylvester Foster, Turin on the Black River, N.Y. It was turned and sent on to New Turin, N.Y. with a prepaid 18¾¢ rate.

A brown 26mm circle was introduced about 1835, which is seen with an underlined month on an undated double rated 25¢ example originating at Westfield N.Y. and reposted to Carbondale, Pa. rated 37½ as well as without the underlining on a cover posted at Jamesport N.Y. 5/14/35.  The day appears to be always in manuscript.  Examples shown include regular mail, forwarded mail and a way letter from Jamesport dated May 14, 1835 rated 19¾¢ at Suffolk C.H. addressed to New London and then forwarded on from there to Norwich, Conn. with a red straightline ‘Forwarded’ for an additional 6¢ making a total rate of 25¾¢.  It discusses a rail line and not a river route.  This is apparently an every reference to the future long Island rail line that opened in 1844 to Greenport.  It was open from Brooklyn to Hicksville by 1837, but really flourished when it handled the New England mails in 1844.  By 1841 the marking is in black as seen by a January 11, 1841 example to the Comptroller of New York enclosing a bond. 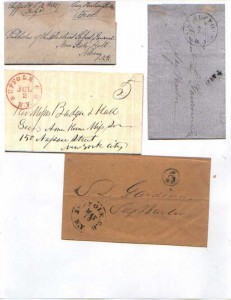 A red 33mmm circle replaced the small brown circle by about 1845 as is seen by an example of July 2, 1849 and continued in use to at least December 20, 1852 as a Gardiner correspondence cover datelined Quogue but posted at Suffolk C.H. shows.  Then in 1853 a black strike replaced it as shown by a May 13th un-year-dated example with a circled black 5 rate from the Gardiner correspondence.  An 1849 letter reports that the town, known as Riverhead, had a temperance hotel, but that the temperance groups are unfriendly to the church.  Most covers in the stampless period are manuscript rated, but a circled black 5 is known. The black c.d.s. is still used November 28, 1854 when an example with a black straightline PAID is found.

The post office name changed on November 6, 1855 to Riverhead with Elbert Whitman as postmaster.  An example of January 9, 1861 shows the new black 33mmm handstamp and circled 10 rate on an incoming letter from Jacmel, Haiti.  It is ex-Smith.  This cover which discusses logwood exports (used in inks among other things) It was carried not to New York, where it was addressed, but to Riverhead where it arrived on the 1,064 ton Conquest, a vessel on the New Orleans-Liverpool ‘Regular’ line in 1860.  The letter was rated in pen ‘Due 2’ for the in-ship fee and with an encircled black 10 for the double rate from Riverhead to New York City. 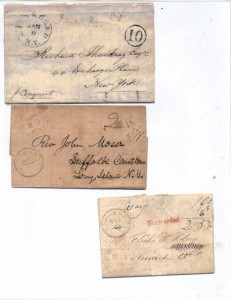 One of the features of Suffolk postal history is that John A. Fox, a leading dealer and forger who dominated the market in the 1940s when postal history was beginning to expand, controlled much of it.  He altered many covers, particularly from the Gardiner correspondence to create rarities such as the STEAMER/5 and STEAMER/OREGON markings with 1847s where the handstamps were added and impossible in their use.  He also changed dates on many of the Long Island Railroad covers so that a dating sequence still has not been fully made between the small and large rated examples.  There are probably other problems that have not yet come to attention.  He was an expert in postal history, but his fakes were always below his level of knowledge.