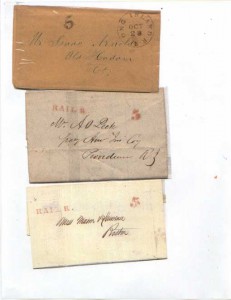 The earliest known markings are the straightline RAIL R. examples, with the earliest being the one shown to Providence dated February 26, 1846.  The latest is the May 12, 1846 item addressed to Boston asking for a receipt to be returned by mail. It is one of three known to Boston.  The marking was replaced by the large 29mm double-circle L. I. RAIL ROAD/5/mspt. date/N.Y.  An example from Mills Pond July 24, 1846 to Ethelburt Mills on Wall Street is seen.  It discusses a possible trip to Montauk and a promise of pineapple for the local fair, which Mills is directed to put on the steamer.  A second dated September 1, 1846 is to Thomas Mills asking him to bring some brown sugar and reporting the well has failed. An example with a large PAID dated Brooklyn August 1, 1846 is addressed to Southold.  It reports incident of potato fever and that potatoes should not be sent to Brooklyn unless rotting. This PAID is seen on covers from Yaphank.   One of two recorded examples of the 10¢ handstamp rate is seen on a September 22, 1846 cover from Hauppauge to Pennsylvania.

The successor marking is a small lettered version with the 5 CTS in the middle.  Copies I can definitely date range from January 21, 1849 to the example shown of October 3rd, which is a love letter from a B’Hamton (Bridgehampton) farmer to his girl on 260 W. 18th Street in Manhattan that was carrier delivered.  I do not record a 10¢ version of this marking.  This marking was quickly abandoned and a 34mm LONG ISLAND/R.R. marking substituted.  Most of the red examples are poorly struck as is the one from April 3, 1850 shown.  It is written at

Gunter’s Hotel in New York and is addressed to Greenport .  The writer reports only one other person is staying upstairs at the hotel and that he will try and get home on the evening train, e.g. he is an early commuter.  A black example of the same marking dated at Cutchogue October 28, 1854 is addressed to Connecticut and has the unpaid 5¢ rate.  It notes price of stone is so high that the writer will use brick instead.

To understand mail handling on eastern Long Island, it may be well to focus upon two towns—the countryseat—Suffolk C.H. and Sag Harbor, the leading commercial center until the 20th  century.