Our January meeting was devoted to Brooklyn as a symposium as no one was willing to serve as seminar leader. It brought quite exuberant responses from the attendees who kept interrupting each other with reminiscences and comments on the covers shown. Several corner card examples of the Hotel St. George were shown and they elicited the most comment. This hotel was known as the largest in the United States, cover two full blocks. It also was the 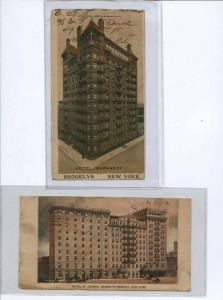 subject of one of New York’s major fires in 1995-a 16-alarm fire that brought fire companies from as far away as the Bronx and from every borough except Staten Island. Most of the participants remembered the large swimming pool in the hotel, an Olympic-sized pool. There was much discussion over the Williamsburg postmarks as there are two towns of that name in New York. However, the Livingston county town had no postoffice after 1823, six years before the Brooklyn Williamsburg office was erected.

While Albany was the first locale settled in New York State (Castle Island in 1540, resettled as Fort Nassau in 1614), the settlements in New York City occurred in 1624 when Walloon families came over. Settlement was made at Nut Island (Governor’s Island today) and farms set up on Manhattan south of Wall St. Reportedly the first child born in New York was Sarah Rapelje on June 9, 1625 at Wallabout (Walloon Bay) Brooklyn. While Brooklyn was on the post route south to Philadelphia in colonial times, no postoffices were erected until 1803. A private postman, Seymour Dunbar, operated earlier from the Brooklyn ferry out to the Long Island towns in the 1798 period. Brooklyn is part of Kings County, which was erected November 1, 1683. The postoffices to 1852 are:

None of the nine towns that made up Brooklyn prior to 1852 were ones that received the 1847 issue directly from Washington. Rather it was expected that the Brooklyn offices were to order from their nearby neighbor, New York City. The alternative was to get them from the L. I. Railroad Route Agent, a line that ran from the ferry pier in Brooklyn via Jamaica to Greenport, L.I. While that line had several route agents, the only ones to receive stamps of the 1847 issue were G. W. Smith, who received the first of three shipments (totaling 100 10¢ and 2,300 5¢) on August 24, 1848 at New York and R. W. Smith, Jr. who received one shipment of 800 5¢ on January 29, 1849. Of course patrons could carry stamps in and use them on letters from Brooklyn as well. Four ferries joined Brooklyn to Manhattan while two joined Williamsburg to New York.

Although the city had a population of 138,882 in 1850, not counting Williamsburg, which was incorporated just after the end of the 1847 issue, of the nine towns that had postoffices during the 1847 issue, only eight covers are currently recorded with Brooklyn uses of the 1847 issue and one from Williamsburg, for a total of nine. The survival ratio of 1847 covers for the total United States was about one per 1,800 of population, Brooklyn’s figure is one 1847 cover per about 1,600 population while across the river in New York the result was one per 210 population reflecting New York’s preeminence as a business center and the rapid adaptation of business firms to the use of the new adhesives. (Boston with an 1850 population of 136,881–larger than Philadelphia-had one 1847 cover per each 135 people and Philadelphia about one per 100 people.) The new Alexander book census shows but one 10¢ 1847 cover from either Brooklyn or Williamsburg. It was a thus far undated cover from Brooklyn to Gill, MS (in Franklin county) with a green encircled WAY.

There were seven 5¢ 1847 covers with Brooklyn postmarks and one from Williamsburg. Additionally there were two faked covers (one to Springfield MS that has a ‘not genuine’ Philatelic Foundation certificate because of a faked PAID and the other a local use with a manuscript ‘paid’ and a 5 handstamp that also has a not genuine Philatelic Foundation certificate.) Of the five-cent covers, only two paid 10¢ rates, the illustrated item and a companion cover. They are the only two to have destinations outside either the states of New York or Massachusetts.
All the Brooklyn covers have manuscript killers except for one with a grid killer and the aforementioned 10¢ WAY cover; the Williamsburg cover, which is only a front postmarked October 1st to Miss Mary Wells, Whitesborough, N.Y., has a straightline red PAID and an unexplained straightline red 2. It does have a good Philatelic Foundation certificate.

The dates of the known dated covers ranged from early February 1848 to June of 1850. This means that 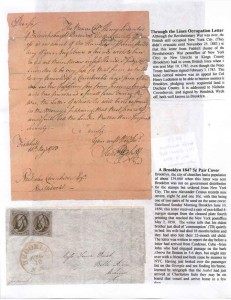 two bear the 1st printing 1847s, one would bear the poorly done 3rd printing and the rest probably are from the cleaned plate 4th printing.. The illustrated cover is from the cleaned plate 4th printing. that reached the New York postoffice May 2nd. It may well be the finest of the Brooklyn 1847 covers on record. Datelined Sunday morning June 10, 1850, it bears a 4-margin pen-killed pair of the 5¢. The writer of the illustrated letter states that his older brother had just died of consumption (TB) quietly in bed and that his wife had died 18 months before; they had also lost their 22-months old child. The letter was basically written to 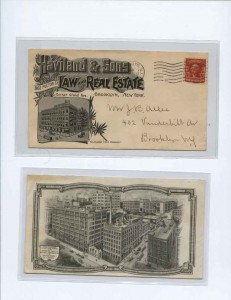 report that the preceding day a letter had arrived from Cardenas, Cuba from John, either a relative or mutual acquaintance, that he had engaged passage on the bark Almira for Boston in 5-6 days, but that he might stay with a friend and both come by steamer to New York. The writer adds that having just looked over the passenger list on the Georgia and not finding his name learned by telegraph that the Isabel had just arrived in Charleston, S.C. feels they may have embarked on that vessel and therefore will be home in a few days. According to the Ashbrook Research Group report for the year 1850, page 7, the 2,728-ton Georgia was part of the U.S. Mail Steamship Company Through Line to California via Havana, New Orleans and Chagres. George ‘Live Oak’ Law with his associate Marshall O. Roberts, and Howland and Aspinwall had reached an agreement with the Pacific Mail line in February, effective in April 1850 by which Law and his United States Mail Steamship Company was to operate on the Atlantic side and the Pacific Mail Co. only on the Pacific side of the isthmus. In June Vanderbilt threatened to intervene and put the Pacific on the Pacific coast, but his new Nicaragua route didn’t come into effect until 1851 .

The Georgia under command of Captain David Porter of the U.S.N., which arrived at New York on the 9th, was to depart again at 3 p.m. on the 13th direct for Chagres from the foot of Warren Street according to a notice from the line’s agent M. O. Roberts at the firm’s new office on the North River (Hudson) at the corner of Warren and West Streets (they moved June 7th). Captain Porter 1813-1891) was the son of the David Porter of War of 1812 fame. He first sailed with his father 1823-1824. He served during the Mexican War as commander of the Spitfire and took part in the bombardment of Vera Cruz, but is most famous for his relieve of Fort Pickens, at Pensacola Fla. in April 1861, the attack on New Orleans with his foster-brother David G. Farragut, and his part in the Vicksburg campaign where he ‘opened the Mississippi’ by the run past Vicksburg on June 28, 1862 and again in May 1863 in the battle that enabled Grant to take that city.

The Isabel was an independent steamer of 1,125-tons built in Baltimore that had the coastal run to Cuba. Spofford & Tileson’s Havana line owned it. The act of March 3, 1847 provided for a contract service between Charleston via Havana to Chagres. The Isabel was put on this run October 17th or 18th 1848. It ran almost exclusively between Charleston and Havana every two weeks until the Civil War . Paul Spofford and Thomas Tileson had a number of coastal steamer lines, to Savannah, Charleston, etc. as well. 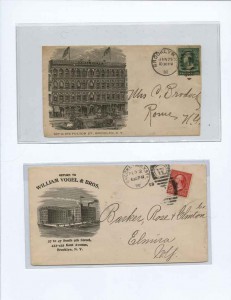 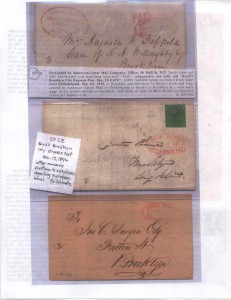