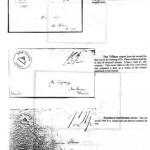 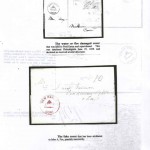 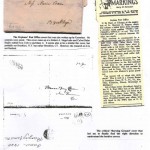 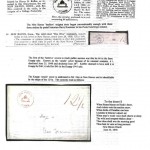 Our seminar leader for the April 11th meeting was Bernard Biales who took the subject of the New Haven Beehive Enigma and detailed how the philatelic perceptions shifted from a rare postal marking to a forerunner of the Civil War sanitary fair markings and adhesives. While some might have wanted a direct link setting forth the problem and the solution, Mr. Biales, with my interjections, chose to show the misconceptions, dead ends, and serendipity effects that led to the final resolution of the enigma. Having researched the subject for over 30 years myself, I was well aware of the conflicting views, personal obsessions, financial interests and lack of source material that impeded progress and thus felt it appropriate to show the travails of such research.

I first began to be interested when trying to figure out the rates and routes of the Dunsmoor cover that was datelined Philadelphia but which had a 12½¢ rate, an evident impossibility for the over 180 mile distance. Next was to check for a ship named the ‘Beehive’ in the Lytle-Holdcamper list of steamboats between 1790 and 1868; none was found. It was these two facts that caused the cover to receive a ‘decline’ opinion as to being a postal marking and a bitter denunciation from the original finder, Harry Kieffer.

Contact with Keiffer’s partner, Carroll Alton Means, brought a letter describing his shock and disappointment when he discovered Kieffer painting in the beehive on one of the beehive covers. If not a postal marking what was the beehive? The rate markings on the covers resembled the handwriting of covers I owned that went on the Hudson River steamboats. Too, the Day family was well known in New Haven, but there were others as I found when I purchased a lot of Day correspondence from New York State.

I next tried to see if there was a tie-in with either a New Haven bank or a local society. I tried several times to locate information in the New Haven Historical Society without success and wasn’t willing to spend the hours needed to search the New Haven newspapers. It was at this point Mr. Biales became involved and his story begins.

The first of the ‘beehive’ covers to reach public auction was this lot 66 in the famed Knapp sale. Known as the ‘oracle’ cover because of its unusual contents, it is datelined June 25, 1848 and docketed June 28th. Kieffer claimed to have sold it to Knapp for $40; it sold for $46 in the Knapp 1941 sale.