This seminar on fancy cancels was given by Andrew Levitt.  The talk was well received and there was quite a bit of discussion over the methods suggested for putting a collection together and making presentations with it.  The pros and cons of stock-books, various mounting techniques (such as the Colson mounts) and expertizing were aired.  Attached are examples taken from the write-ups of Louis Grunin’s New York fancy cancel holding, as well as presentations used by John Boker at Anphilex 1996.  His stock books were shown, as were selections of Randy Neil’s stock books.

In making the decision to collect 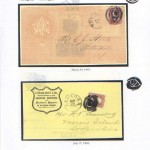 fancy cancels, the first thing to do is set the limits of what you collect.  This involves defining the collecting area, the economic limits, and the time frame involved.  In determining the collecting area it should be both something you would enjoy and which is feasible. Too broad and area will overwhelm you; too narrow an area will result in frustration when you can’t get material.  At the same time you are defining the collecting area, you have to consider the monetary effect.  Some fancy cancel areas, like the Waterbury, CT. ones can be expensive; others can be fairly reasonable such as various crosses on an inexpensive stamp like Scott #210 the two-cent red brown.  Fancy pictorials are expensive; most PAIDs are not.  Once these two elements of your collecting equation are tentatively in place you need to consider the time frame you wish to encompass.  Fancy cancels are known from the stampless period to the present.  Will you collect one stamp or issue or do you want to range by topic over a decade or more.  Classic fancy cancels ad their heyday in the 1860s through to the 1880s. Once you have an idea of what you wish to collect, how much money may be involved, and the time period, a program of research or knowledge should be set up both for a final review of the tree dimensions to see that they are feasible and to alert you to what is out there.  Several books in the field may help guide you.  These include: Paul Rohloff’s Waterbury Cancellations 1865-1890; Amos Enos United States Cancellations 1845-1869; James Cole’s Cancellations and Killers of the Banknote Era; Sol Solkind’s U.S. Cancels 1890-1900; Paul Berg’s Chicago Blue Postal Markings 1870-1877; M. Waud and A. VanVlissingen’s New York Foreign Mail Cancellations; Lose and H. DeWindt’s 20th Century United States Fancy Cancellations. There are also significant articles in the field as well as auction catalogs of past sales such as the Henry Houser Waterbury cancel sale (Christies 12/13/1990), the Waud foreign mail and Greenbaum Masonic cancel sale (Siegel 1/25 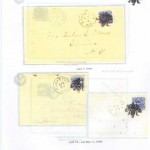 -27/1972), the George Hale fancy cancellation holding (Siegel 4/29/1954), and the Amos Eno fancy cancels (Frajola 1/25/1986) as well as the upcoming Levitt Nutmeg sale of 1/27/2000.  It is also useful to check the stocks of dealers who specialize in fancy cancels such as Ed Hines or Louis Kaufmann.  You can use the Internet to locate other items being offered as well as collector buddies who will help you acquire or spot items for your collection.

Fancy cancels can e collected by topic, issue, city or state, postmaster, by color, design, on-cover and off-cover, as foreign mail or pre-cancel, river packet markings or just as a section of your other collections.  You can set up the collection to tell the story you want, illustrate the research you have done or just to enjoy.

Once a number of cancels have been obtained it is necessary to decide how to set up your collection and if you are going to exhibit.  You can mount the collection on pages or keep them in stock books.  You can decide you are only mounting covers or both stamps and covers.  For exhibit purposes it is best to mount them on movable mounts. 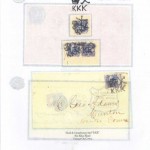 Warren Colson, a famed Boston dealer, was the first to set up stamp mounts that could be moved in entirety from page to page leaving cost codes or other identification on the back of the mount itself.  You can use large corner mounts for covers or small.  However, most exhibitors do chose to layer border their covers with something like an off-white backing that extends several millimeters around the cover.  This also permits moving the cover from page to page without directly handling it.

Sample pages were shown covering the presentation of: a) a cover and off-cover stamp on the same page, b) two covers on a page, c) layering for more covers in unusual cases, d) a selection of off-cover fancy killers and e) highlighting a specific rarity. 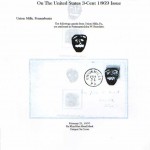 more useful computer programs to handle inventory and cost.   However, other more direct methods were also discussed.  The problem of genuineness was opened up with a selection of fakes weeded from major collections shown.  There was also a discussion of expertizing services and when and how to most effectively use them.