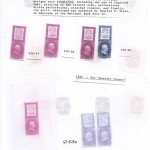 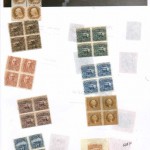 Those of you who missed Alan Geisler’s seminar on proofs and essays missed seeing some remarkable examples.  His decalcomanias were of the finest quality I have seen in the past thirty years.  His Bowlsby large die is the scarlet variety with the manuscript ‘A’ faint below the sinkage, confirming the note in Evans’ book.  There was a very nice horizontal pair of the 1867 John Sturgeon patent ‘unused’ carmine and the ‘used’ dark carmine without lines in the labels. Among the safety paper essays was the Jones Grant essay and several of the 1869s. (As far as I know no one has ever put together a complete holding of the 1869 safety papers.)

Notes from Alan Geisler’s seminar on Classic Proofs and Essays

As a start, although it may sound trite to say so, I find proofs and essays very interesting areas of collecting.  Certainly, if one enjoys the beauty and artistry of engraved stamps, proofs, because of their bright colors and sharp impressions are more attractive than the issued stamps, and, usually, but not always, much less expensive than the actual stamp in mint condition.  Essays, on the other hand, offer a variety of examples.  Some of these are almost identical to issued stamps, while others are quite different, and range from beautiful to absurd.

Before proceeding further, definitions are important, but really quite simple.  An essay as we are discussing, is a proposed United States stamp design.  It may vary only slightly from an issued stamp, or be a design rejected totally; or somewhere in between.  A proof is the final approved design, exactly, but in a form not intended for postage.  Since the principal thrust of this seminar is to be essays, we will talk about proofs first.

1) Proofs are basically of two types: die or plate proofs of the to be issued stamp in the approved color, on either card or paper, or trial color proofs in which the finished design is printed in a variety of colors, so the Post Office could pick which they liked best.  Trial colors also exist and die or plate proof, and can be printed on card or on India, bond, or stamp paper.  Some of these can be quite spectacular in appearance, as the 1869’s can attest.                           Interestingly, until quite recently, two trial color proofs, #66 and #74, were listed as stamps in the Scott catalog.  They are now properly listed, to the disgust of stamp dealers and auctioneers, as trial color proofs.  Finally, collectors must be on the lookout for proofs, which have been fraudulently shaved, gummed, and perforated; and offered for sale as stamps.  I have seen a number of these offered at auction, properly described, and bought in by dealers, at prices much higher than they deserve.  One can only presume what they are intended for.

2) Essays are proposed designs.   As you are undoubtedly aware, prior to 1894 all U.S. stamps were printed privately under contract to the Post Office.  Subsequent to this date, and until recently, the Bureau of Engraving and Printing printed stamps.  Stamps before 1894 were printed by various Bank Note (i.e. currency printers) Companies. In response to a request for bids for upcoming contracts, these companies would submit proposed designs (essays) as well as cost bids.  Initially, almost all essays involved portraits (vignettes) surrounded by a frame indicating the fact that it was U.S. postage, accompanied by a denomination.  To save costs the vignettes were invariably engraved from the printers’ files, which were used for currency, or bank notes.  Most essays were prepared as die essays, not entire plates although some of the 1867s were in miniature sheets of 12, and the 1869s pictorials were done in multiples.